I’m delighted to be sharing my thoughts on A Wash of Black by Chris McDonald on my blog today. This is Chris’s debut novel and I am sure I’ll be returning to his work again in the future. 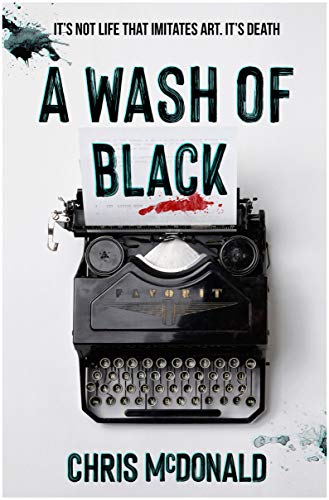 The body of a famous actress is found mutilated on an ice rink in Manchester, recreating a scene from a blockbuster film she starred in years ago.

DI Erika Piper, having only recently returned to work after suffering a near-fatal attack herself, finds she must once again prove her worth as the hunt for the media-dubbed ‘Blood Ice Killer’ intensifies.

But when another body is found and, this time, the killer issues a personal threat, Erika must put aside her demons to crack the case, or suffer the deadly consequences.

A Wash of Black is a strong debut crime novel by Chris McDonald, and I finished it in just a couple of days. This is the first book to feature Detective Inspector Erika Piper, and I can’t wait to catch up with her again.

Erika has only recently returned to work after taking a break for a year following a horrific event which took place twelve months earlier. But she suddenly has her work cut out when the body of a celebrity is discovered which will no doubt propel the case into the media spotlight. What is even more disturbing is that the killer has chosen to re-enact a murder screen from the star’s latest film. Clues left behind by the killer prompt Erika and her team to think that this won’t be the last of the killings.

This was a really intriguing first case for Erika and her team to get to grips with. I liked how Chris McDonald led me in different directions as he threw in each red-herring. He didn’t make it very easy for me to pinpoint the murderer, and I wanted to know what their motives were. This led to me considering a few of the characters as possible suspects, and when I thought the story was going one way, Chris managed to pull the rug out from under my feet.

Erika is a great character. She has an intriguing back story which made me want to find out more about her and what had happened in her past. She grew on me really quickly, and I can see her becoming a favourite character of mine in this genre.  You can see how difficult it still is for Erika to overcome what has happened in her past. This is also having an impact on her current relationship with her boyfriend. But she is also determined to make sure that this doesn’t have an impact on her work. It won’t stop her from trying to catch the person responsible before they kill again. It’ll be interesting to see how she will develop from this point on.

Chris McDonald keeps the pace of the book flying forward. I had to keep reading to find out the answers, and I could feel the tension rising as Chris threw in each new twist in the case.

I’m sure I’ll be returning to this series in the future, and I hope that we don’t have to wait too long for the next book. A Wash of Black is a chilling crime novel that will draw you in and keep you hooked.

A Wash of Black is available to buy: