I’m delighted to be joining the blog tour for C.L. Taylor’s latest psychological thriller, Strangers. With thanks to Sanjana Cunniah at Avon Books for inviting me to take part. 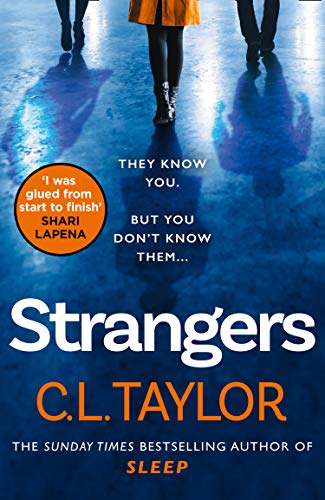 Ursula, Gareth and Alice have never met before.

Ursula thinks she killed the love of her life.
Gareth’s been receiving strange postcards.
And Alice is being stalked.

None of them are used to relying on others – but when the three strangers’ lives unexpectedly collide, there’s only one thing for it: they have to stick together. Otherwise, one of them will die.

I’ve been a big fan of C.L. Taylor for a while now, and I think that Strangers, her latest, is her most addictive and compelling book yet. Whenever I’ve picked up one of her books, I’ve read them in just a couple of days. C.L. Taylor creates a cast of intriguing characters, and she draws you into their lives and personal struggles. Nothing binds them at the start of this book, and how she brings them together is done brilliantly. C.L. Taylor will have you wondering throughout how everything is going to pan out, and how she does this will totally shock you.

We’re introduced to three characters, Gareth, Ursula and Alice. They are all going through some kind of turmoil in their lives. Gareth finds himself at the centre of a police probe which he has no idea about; Ursula is addicted to shop-lifting and the thrill of it, which is why she has just been kicked out of the flat she shares with her friend. Alice is scared that she is being stalked and is constantly on edge. And in the midst of this, strange disappearances are sparking intrigue in the local community, prompting many to start discussing them online.

What really makes this book exceptional are the characters. I found their lives and their circumstance utterly compelling, and it’s what made me turn the pages faster and faster. I think I felt most for Ursula as she battles her addiction to shop-lifting. You can see that she is desperate to stop doing this as it is destroying her social life, particularly when her friends kick her out of her flat. And I engaged with Gareth and Alice. Gareth works as a security guard, which is already a demanding job, but he also has to care for his mother, who has dementia. I felt exasperated for him when he became involved in a police investigation, especially as he already had a lot of other things going on in his life demanding attention. Alice is desperate to find love again, but she is also having to deal with her teenage daughter trying to give her advice. But her daughter may not be giving her advice in the most sensitive of ways.

It’s really hard to talk more about the plot without giving anything away, but what I can say is that you will be pulled into the lives of the characters and the story, C.L. Taylor has created without any effort. If you’re already a fan of her work, you’ll no doubt already know what a treat you have in store. Strangers is C.L. Taylor’s best book yet.

Strangers is available to buy: