I’m delighted to be taking in part in the blog tour for The Murder Game by Rachel Abbott today on my blog. With thanks to Anne Cater from Random Things Tours for inviting me to take part. 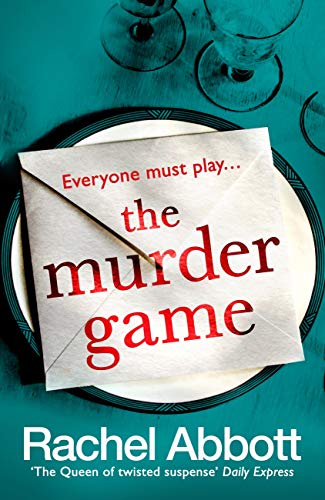 A year ago today, we all gathered for Lucas’s wedding at his glorious Cornish home overlooking the sea.

But no one was married that day.

Now Lucas has invited us back to celebrate the anniversary. But the anniversary of what? The wedding that never happened, or the tragedy that occurred just hours before the ceremony was due to begin?

He’s told us that tonight he has planned a game. We have our costumes, we have our parts, and everyone must play. The game, he tells us, is about to begin.

What does Lucas want from us? What are we not being told? And what’s going to happen when this terrible game is over?

It’s not often that I read a book practically cover to cover, but The Murder Game by Rachel Abbott is one I literally could not stop reading. As I was reading it, I couldn’t help but compare it to the works of Agatha Christie. Rachel does a brilliant job at creating an eerie atmosphere and by hooking the reader very early on with her writing and not letting them go. There is also a really creepy vibe to this book, particularly as we move forward a year. This book will definitely make you think “oh, I’ll just read one more chapter,” before I knew it, I’d devoured the entire novel.

While this is the second book in the Detective Sergeant Stephanie King series, it can definitely be read as a stand-alone. In these books, the police investigation takes a bit of a back seat, and Rachel Abbott focuses primarily on the group of people who are at the heart of the crime that has taken place. Of course, we do get to hear from Stephanie’s point of view, as she is investigating the case, but the book’s narrative is mainly told from the witnesses point of view. I really like Stephanie, and I hope we do get to find out more about her and some of her colleagues as I like the interaction that she has with them.

The book starts a year earlier when Jemma and her husband Matt, are travelling to a house in Cornwall, the home of one of Matt’s long-standing friends. His friend, Lucas, who is a multi-millionaire, is getting married, and the wedding promises to be a glitzy event, with no expense wasted. Everything seems to be going well, but we do get the hint of something mysterious afoot, when Lucas’s sister, Alex arrives. It is clear that something dark is hidden in the past and Matt is very reluctant to talk to Jemma about it. It is only a year later when the true events of what happened come to light and dark secrets are revealed. The book is very well-plotted, and I am reluctant to talk much more about it as I want you to experience the same surprise and intrigue that I did while I was reading it.

One thing that did strike me early on was Jemma’s relationship with her husband, Matt. I found it very odd that he’s never spoken to her about his friendship with Lucas. It did seem a little strange to me that he would wait until they were driving to the venue to tell Jemma who their host for the weakened was. It may be just me, but this is one part of the plot which played on my mind.

The moment that Alex arrived at the scene, I could sense the change in the atmosphere. It was in Matt’s reluctance to tell his wife about what had happened in his past that made me want to find out what had taken place. And the tone of the novel darkens when Rachel Abbott turns the tension up a notch and every single person who was present starts to look at each other and tries to work out who could have been the culprit. I kept wondering what was really going on here, and who was hiding secrets.

The Murder Game is a compulsive psychological thriller that will keep you completely gripped to the dark and tension-filled plot. There was one twist at the end, which did blow my mind. It takes a lot for a twist in a novel to do that for me. If you’ve not yet picked up a book by Rachel Abbot definitely do yourself a favour, this is an excellent read!

The Murder Game is available to buy: