When I first read the blurb for Goldilocks by Laura Lam I knew it was a book for me. I’m delighted to be sharing my review of her latest novel on my blog today. 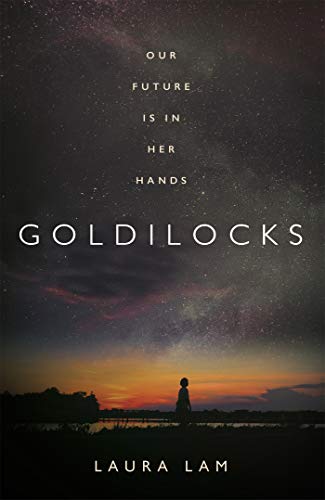 Ravaged by environmental disaster, greed and oppression, our planet is in crisis. The future of humanity hangs in the balance – and one woman can tip it over.

Despite increasing restrictions on the freedoms of women on Earth, Valerie Black is spearheading the first all-female mission to a planet in the Goldilocks Zone, where conditions are just right for human habitation.

It’s humanity’s last hope for survival, and Naomi, Valerie’s surrogate daughter and the ship’s botanist, has been waiting her whole life for an opportunity like this – to step out of Valerie’s shadow and really make a difference.

But when things start going wrong on the ship, Naomi starts to suspect that someone on board is concealing a terrible secret – and realises time for life on Earth may be running out faster than they feared . . .

Goldilocks by Laura Lam is an epic story focusing on four women who have dreamed of travelling to the stars. Their destination is an exoplanet named Cavendish, situated in the habitable zone (the goldilocks zone) of its star. It is just right for humans to be able to live on its surface, and it offers a safe haven for humanity to start anew. Earth has been turned upside down. Climate change has ravaged the surface of the planet, forcing many people to flee their countries which have become inhospitable. Scientists predict that Earth can only host human life for another thirty years. And so there must be a plan B for when that becomes an eventuality. Cavendish offers humanity that chance.

A mission lead by Valerie Black is set to become the first manned mission to Cavendish.  It also means that the three other women will become the first human beings to set foot on a world outside of our solar system. But all doesn’t quite go to plan during the mission.

This genre is quite different from what I usually read, but I have become a fan of science fiction more recently, and this book seemed right up my street when I first heard about it. And there are elements of a thriller to this book as well which intrigued me even more. I think I am a bit of a nerd when it comes to learning about the solar system and the universe. I for one can’t wait for when the James Webb Space telescope is launched, hopefully, at the end of March next year, which Laura references in the book.

There are so many topics that Laura Lam explores in her book, climate change, feminism, and greed are some of the main themes. Climate change is something that has been brought to the forefront of people’s minds recently. It is scary what is happening in the world now, but I dread to think what the world could be like in thirty years time if we don’t do anything about it. Laura Lam sets her book in the not too distant future, so it brings those fears a lot closer to home.

In the future version of the world which Laura has created, Valeria Black and her team are among the women fighting back against a male-dominated society. Misogyny is on a sharp rise on Earth, and it is a topic that has never been far from the mind of Naomi Lovelace, Valerie’s foster-child. It has been her dream to explore the universe, but she knows her options are limited, which makes her even more determined to succeed.  And when they take charge of the Atalanta, the ship which will take them to Cavendish, it angers leaders back on Earth. In their eyes, the women are criminals.

Laura Lam keeps the tension mounting as the crew on the Atalanta race towards their new destination, first to Mars and then onto Cavendish. But as events escalate back on Earth, soon a perilous decision will have to be made. This leads the book to an explosive and a satisfactory climax. I’m sure will stay with me for a while.

This book deserves to be huge. If you’re a fan of sci-fi and thrillers, you will definitely enjoy this book. But if you haven’t stepped a toe out of each genre, I would highly recommend giving this book a go.

Goldilocks is available to buy: