I can’t believe it has taken me this long to read Jack Jordan’s latest thriller, Night By Night. I’m a huge fan of his books so I will be making sure that I am not this late when his next book comes out. 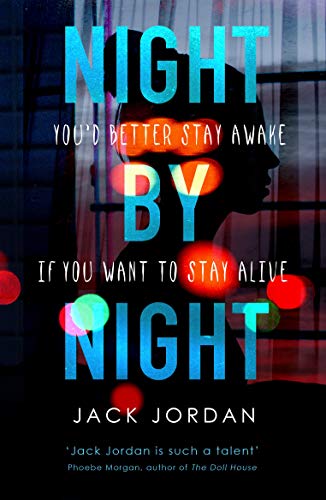 If you’re reading this, I’m dead.

Rejected by her family and plagued by insomnia, Rose Shaw is on the brink. But one dark evening she collides with a man running through the streets, who quickly vanishes. The only sign he ever existed – a journal dropped at Rose’s feet.

She begins to obsessively dedicate her sleepless nights to discovering what happened to Finn Matthews, the mysterious author of the journal. Why was he convinced someone wanted to kill him? And why, in the midst of a string of murders, won’t the police investigate his disappearance?

Rose is determined to uncover the truth. But she has no idea what the truth will cost her…

Night by Night is a heart-breaking and a powerful read by Jack Jordan that will pull you in from the first page. It is written with urgency and pace, and I became invested in Rose’s world as she becomes involved in an investigation purely by chance. She comes across a journal which details a haunting account of a young man, Finn Matthews, who is targeted by another individual. Finn is convinced that the man is going to kill him. But when Rose takes the journal to the police, she finds that there are very few people who are willing to talk to her. It is clear just how exasperated that she feels like this and I felt angry that they weren’t showing any interest.

In the opening chapters when we first meet Rose, I have to admit that I didn’t particularly like her, and I couldn’t believe what I was reading when I reached the end of chapter three. It did propel me to read forwards, and I ended up racing through the novel. But as the story develops, I became more and more invested in Rose’s character and in her plight to get justice for the young man whose journal she has discovered. And it isn’t long before she has found similar cases which have been brushed under the carpet.

Rose herself has suffered from a horrific trauma which has destroyed her family. In the early pages, she is suffering from insomnia, and this leads to a devastating event throwing her life and her family into chaos. I felt really sorry for Rose. Jack Jordan builds her character really well, and as we learn more about her past, we can see why she has become attached to the man she is reading about and why she is so determined to get him justice. But the more determined she became I could also feel the danger that was closing in on Rose. There are people out there who also want to stop her from investigating, and it is clear that they are willing to do whatever it takes to get her to stop. I wondered just how far Rose was going to be able to continue, but I was rooting for her all the way.

Jack Jordan keeps the suspense and tension going, as Rose’s investigations deepen. When we hear more from Finn through snippets of his journal, I wanted to find out what had happened to him, and who was responsible for his disappearance. As Rose closes in on the person who did this, I could sense that she was putting her life in danger, and I admired her for pushing on regardless.

Night By Night is available to buy:

2 thoughts on “Night by Night by Jack Jordan #bookreview @JackJordanBooks”