I’m delighted to be sharing my thoughts on the latest Maeve Kerrigan thriller by Jane Casey, The Cutting Place. Of course, First Monday Crime was meant to be taking place tonight but due to the ongoing crisis it has had to be cancelled. Jane was meant to be appearing alongside, Dominic Nolan, Chris Whitaker and Tim Glister so please do check out the other authors who were meant to be on tonight’s panel. 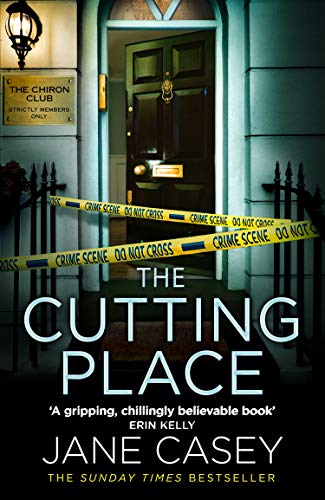 Everyone’s heard the rumours about elite gentlemen’s clubs, where the champagne flows freely, the parties are the height of decadence . . . and the secrets are darker than you could possibly imagine.

DS Maeve Kerrigan finds herself in an unfamiliar world of wealth, luxury and ruthless behaviour when she investigates the murder of a young journalist, Paige Hargreaves. Paige was working on a story about the Chiron Club, a private society for the richest and most privileged men in London. Then she disappeared.

It’s clear to Maeve that the members have many secrets. But Maeve is hiding secrets of her own – even from her partner DI Josh Derwent. Will she uncover the truth about Paige’s death? Or will time run out for Maeve first?

I’ve long been a fan of Jane Casey’s Maeve Kerrigan series, and The Cutting Place is her best yet.  The pace moves fast right from the opening pages when Maeve arrives at a crime scene. The body of a woman, cut up has been discovered on the banks of the River Thames. The victim is later identified as journalist, Paige Hargreaves who up until recently had been investigating a private club. The Chiron Club is exclusive, and not everyone can join. But what gave Paige a reason to investigate it, and why did she have to die? What did she discover? As Maeve and her team investigate it further, it is clear that the club’s members carry dark and disturbing secrets, and they are willing to do anything to make sure that no one finds out the truth.

One of the strongest parts of this series is Maeve’s friendship with her colleague Derwent. Although this can be stretched at times, I think they work together really well, and I am always excited to see them return in a new book. There is always a lot of humour whenever they are together, and it makes for really entertaining reading. This time around Derwent is faced with a new dilemma which I won’t go into any further details about here as I don’t want to spoil it, but it does paint his character in a new light. We also see this as well when he gets involved in a police investigation into a cot death and is briefly taken away from the investigation into Paige’s murder.

There is a really chilling atmosphere inside The Chiron Club. This is a club that is dominated by male masculinity, and Jane Casey explores dark themes as she takes the reader inside. I felt more fearful for the characters as they stepped closer to uncovering the truth about what goes on there. The people who run the club aren’t keen to divulge any information to Maeve and her team. It is going to be tough for them to get to the bottom of what goes on behind the club’s closed doors, but Maeve is determined to make sure that they find out the truth.

Jane Casey’s writing is absorbing from the first page; I’m always drawn right into the plot and into the lives of characters. Every time I come to the end of one of her books, I can’t wait to get my hands on her next. Jane Casey always writes thrilling and gripping police procedurals, and I can’t recommend her novels highly enough.

The Cutting Place is available to buy: