It’s my pleasure to be joining the blog tour for the new novel by Ricahrd Whittle on my blog today, Ground Rules. With thanks to Emma Welton from Damppebbles blog tours for inviting me to take part. 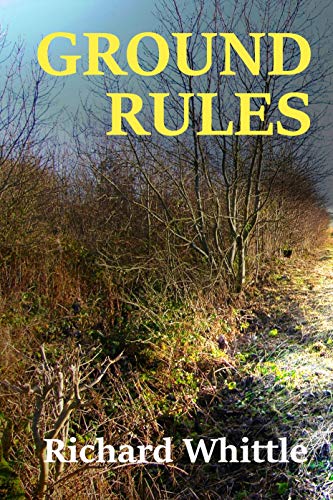 Called out one night in the hope that she can identify the body of a man found in a field, Edinburgh forensic geologist Jessica Spargo – Jez – inadvertently becomes involved in the investigation of a university lecturer’s murder. The investigating officer, Tom Curtis, hands her a small glass vial and asks her to analyse its contents. She agrees to do it. The results confound everyone. Media attention around a seemingly unconnected incident on a construction site near Edinburgh means that all work has stopped. An object discovered beneath the site confounds everyone, including the police. Employed by the firm’s owner to attempt to solve the mystery, Jez falls foul of an uncooperative site manager. Unruffled, she perseveres. Meanwhile, the murder mystery deepens. Despite her reluctance to become further involved, she has her own theories about the origin of the vial’s contents, theories the police do not accept. To Jez’s dismay there are more deaths. As she says to Curtis, ‘I don’t do bodies. I’m a geologist, I look at rocks. If I’d wanted to look at bits of body then I would have become a surgeon or a pathologist.’

Geologist, Dr Jessica Spargo doesn’t usually deal with dead bodies. In the opening chapter, Jessica is taken to a site where the body of a man has been discovered. Her help is requested by a friend of hers, Detective Inspector Tom Curtis who she has known for many years. Jessica has been called to see if she can help identify the victim as it maybe someone she knows. But soon Jessica becomes more involved in the case than her friend originally intended her to be. Jessica is pulled further into the mystery, but in doing so, she steers herself very close to danger. The mystery deepens even further with the discovery of another body. This time a body has been found at a construction site, and it may have been there for decades.

The mystery pulled me into the story in Richard Whittle’s latest book. Here we have the discovery of two bodies, seemingly unconnected, and a mystery which deepens as the plot unfolds. I could feel a creeping sense of danger as Jessica invested and got closer to the truth. Jessica’s line of work really intrigued me, and this book offered a different viewpoint for a crime novel. It was interesting to see how Jessica went about her investigations.

I thought that Jessica’s character came to life in this book, and I liked the relationship with her friends Tom and Carrie. She is certainly someone who won’t go away quietly. I could see her dislike for a certain site manager who is keen to get his workers moving again, even though they could potentially damage the body which has been discovered. Although Jessica isn’t part of the official police investigation into the man’s death, she is determined to find out what happened to him and how he ended up at his final resting place. Even though it has likely been decades since the man died, she wants to make sure that he is given all due respect. At this point, I did begin to feel worried for her as I wondered how the people in charge of the dig would react to her need to keep investigating. You can see that they aren’t happy about the building work being held up and potentially costing them a lot of money.

This isn’t a fast-paced read, but Richard Whittle gently pulls you into the story. I really like his writing style, and I became more interested in the mystery as Jennifer did. Her determination made me want to find out the truth, and it kept me turning the pages as I waited to see the mystery unravel. Richard’s description of the landscape and the building site made me feel as though I was there.

Richard’s characters and his writing will keep you completely invested in the plot. Ground Rules is a riveting read, I’d definitely recommend it.

Ground Rules is available to buy: