I’m delighted to be sharing my thoughts on the twelfth book in the DI Kim Stone series by Angela Marsons today on my blog, Killing Mind. With thanks to Kim Nash for inviting me to take part in the blog tour. 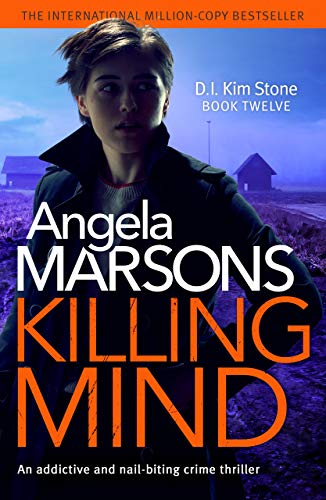 It had seemed so simple. Get in, get the information, get out. But now they were getting inside her mind and she didn’t know how to stop them…

When Detective Kim Stone is called to the home of Samantha Brown, she finds the young woman lying in bed with her throat cut and a knife in her hand. With no sign of forced entry or struggle, Kim rules her death a tragic suicide.

But a visit to Samantha’s parents rings alarm bells for Kim – there’s something they’re not telling her. And, when she spots a clue in a photograph, Kim realises she’s made a huge mistake. Samantha didn’t take her own life, she was murdered.

Then a young man’s body is found in a local lake with his throat cut and Kim makes a link between the victim and Samantha. They both spent time at Unity Farm, a retreat for people seeking an alternative way of life.

Beneath the retreat’s cosy façade, Kim and her team uncover a sinister community preying on the emotionally vulnerable.

Sending one of her own undercover into Unity Farm is high risk but it’s Kim’s only hope if she is to catch a killer – someone Kim is convinced the victims knew and trusted.

With Bryant distracted by the emergence of a harrowing case close to his heart, and an undercover officer in way over her head, Kim’s neck is on the line like never before. Can she protect those closest to her before another life is taken?

Kim Stone is back in the twelfth installment, Killing Mind, in Angela Marsons bestselling crime series. Kim and the team are called to a scene where the body of a young woman has been found. It appears that she has tragically committed suicide, but Kim isn’t so keen to wrap the case up, and she soon discovers something that doesn’t quite match up with the team’s early findings and suspicions. As they investigate the woman’s death further, it draws Kim and the team to investigate a cult known as Unity Farm. And soon the young woman isn’t the only person with a connection to the cult to end up dead. But is the cult responsible for the killings? What had they done that was so wrong to deserve death?

I’ve read a few books recently where cults have featured, and they are scary and fascinating at the same time. It’s terrifying to see how leaders of these cults can easily manipulate vulnerable people and make them wholly dependent on them. Angela Marsons examines just how easy it is for them to get inside a person’s head and change perceptions on their life, and this is the case with the cult’s leader. You can see how other members of the group worship and look up to him, and it becomes clear that they would do anything for him if they were asked to do so.

In the latest book, Angela Marsons introduced us to a new member who joined Kim’s team, Tiffany, who Kim refers to as Tink. Tiffany takes a more prominent role in this book as she is sent to unity farm undercover. Tiff is determined to prove herself to Kim and her team, but we can also see just how vulnerable she is herself, and how she is drawn into the group. It’s been really good to see her character grow, like Kim I think I found her a little irritating in the last book in the series. After this instalment, however, I think she is a welcome addition to the team.

DS Bryant becomes distracted in this book, by a previous case he once worked on before he was part of Kim’s team. A man who helped put behind bars for the murder and rape of a young woman is up for parole, and he lends his support to the victim’s family. He is determined to make sure that the man isn’t released, as he fears that the man will kill again. This was an intriguing sub-plot as we do see a side to Bryant that we haven’t quite seen before. Usually, there is a lot of wit between him and Kim, which I really like, but Killing Mind does seem to take on a darker tone.

Angela Marsons once again captured my interest very early on and held it right the way through. I have reviewed nearly every book in this series now, and it is becoming harder and harder to find new things to say about it. All I can say is that you need to read these books if you haven’t already, you won’t regret it!

Killing Mind is available to buy: