I’m delighted to be sharing my thoughts on The Creak on the Stairs by Eva Björg Ægisdóttir on my blog today. With thanks to Anne Cater from Random Things Tours for inviting me to take part. 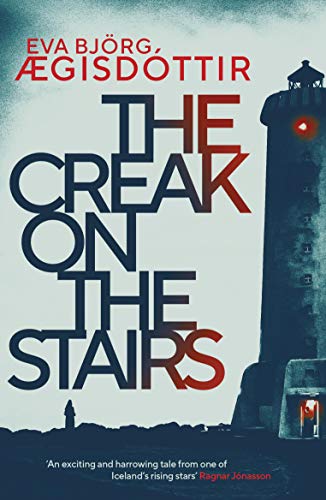 When a body of a woman is discovered at a lighthouse in the Icelandic town of Akranes, it soon becomes clear that she’s no stranger to the area.

Chief Investigating Officer Elma, who has returned to Akranes following a failed relationship, and her collegues Sævar and Hörður, commence an uneasy investigation, which uncovers a shocking secret in the dead woman’s past that continues to reverberate in the present day …

But as Elma and her team make a series of discoveries, they bring to light a host of long-hidden crimes that shake the entire community. Sifting through the rubble of the townspeople’s shattered memories, they have to dodge increasingly serious threats, and find justice … before it’s too late.

There is already one series set in Iceland published by Orenda Books which I’ve really enjoyed, and I can definitely say that I have found another that I’m sure I’ll keep coming back to. It has been translated really well, and I was drawn into the story without any effort. I pretty much devoured the first one hundred pages in one sitting and the mystery at the heart of the story was cleverly constructed.

The Creak on the Stairs is the first book to feature Chief Investigating Officer Elma, who has just returned to her hometown, Akranes, in Iceland. Right from the first page, there is a really creepy atmosphere to this book which is also helped by the rich landscape which pulls you into the setting. I’ve never thought about visiting Iceland before, but after visiting the country in fiction on more than one occasion, I am certainly keen to visit at some point in the future.

Not long after Elma’s return the body of a woman, Elisabet, is found in a lighthouse. The author, Eva Björg Ægisdóttir delves into this woman’s past as the novel progresses, and we discover the tragic life she has lived. But what prompted someone to want to kill her? Could it be possible that she was harbouring a dangerous secret which is why someone had to shut her up? I became more than invested in Elisabet’s life as the author revealed more about her backstory and what eventually drew her to her fate at the lighthouse.

This is a complicated story, and Elma must peel back the layers of Elisabet’s past to get to the truth. There are also some very tough topics explored when we begin to understand what happened. The author explores these well without being over gratuitous, and they make up an integral part of the plot. There is a lot of psychological depth to this novel which pulls you further into the character’s lives as you begin to see what they have gone through.

Elma is a character who I liked straight away. You can see that she is struggling to come to terms with living on her own after recently coming out of a relationship. She is keen to strike up friendships with her new colleagues and is perhaps eager to start another relationship, but I think she should wait a little while before embarking on this route. I also liked the relationship that she has with her mother and I liked the wit in their relationship, particularly when her mother is commenting on her furniture in Elma’s new apartment. I definitely think that she is a character who many readers will want to return to and I can’t wait to catch up with her again. I am wondering how her friendship with one particular character, Saevar, will develop in the future. They make a great team.

As we get to know more about Elisabet and her dark past, the tension begins to build as Elma races to find the person responsible for her death. I think as the reader begins to realise what has happened, it will call them to consider what they would do if they were faced with a similar situation.

The Creak on the Stairs will keep you utterly gripped from the first page. This is a dark, atmospheric story, and I can’t wait to read more from this series, and I hope there is going to be more.

The Creak on the Stairs is available to buy: