I’m delighted to be joining the blog tour today for Winter Rising by Alex Callister. With thanks to Sarah Hardy for inviting me to take part. 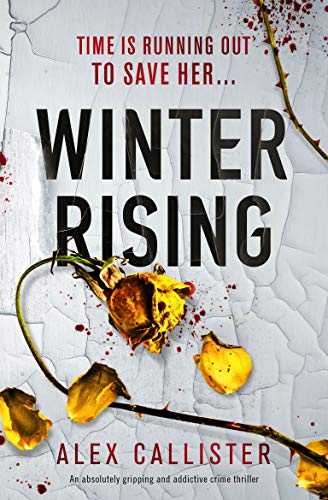 Winter returns to face the most feared hitman of all time: the nameless, faceless Guardsman.

Secret Service agent Winter knows global crime boss Alek Konstantin’s days are numbered after she seduced him, then revealed his identity to the world. Now, permanently on the run from the authorities, Alek fights to regain control as the brutal criminal organisation he ruled with an iron fist crashes down around him.

When a young woman called Lucy is viciously stabbed and dumped on a mossy grave, a harrowing message for Winter carved on her forehead. Winter follows the trail to the Guardsman – a pitiless contract killer, and Alek’s top hitman. Has the Guardsman gone rogue or is Alek pulling the strings to taunt Winter once more?

In a desperate bid to lure Lucy’s killer from the shadows and find a path to Alek, Winter books the Guardsman for a hit on herself. If she succeeds, she’ll have the world’s most dangerous killer at her mercy. But if she fails…

Alex Callister has created an engaging protagonist in her new series who you will be rooting for from the first page. Winter Rising is Alex’s second book and following on from events which took place in the last novel; Agent Winter once again has her mind fixed on the operation Firestorm. It is all she can think about as she imagines new ways to bring it down. In the background, London is gearing up to host the G20 summit, but something is being planned. As Winter begins to infiltrate Firestorm again, she begins to realise that the G20 is being targeted. But someone is after Winter as well. Winter is all too keen to engage them in combat and finish this once and for all.

Alex Callister has created a highly engaging new series. I read the last book really fast, and it was no different with this one. Agent Winter is a character who really stands out. Right from the opening pages, you feel as though you are there with her, as Alex’s writing is sharp and clear, and it draws you into the action on the page. You don’t need to have read the previous book to enjoy this one, but I would highly recommend it if you wanted to get more detail on the operation Winter is up against. It’s something that could scarily be plausible in the real world.

There are some new characters introduced in this book as well, including a woman who begins working with Winter called Xiu. And Winter once again teams up with Leon who featured in book one. I thought they worked together really well, and it’ll be interesting to see how they develop further.

The world-building in Alex’s books is really good and vivid. I like that Alex Callister takes us to a variety of different places across the world, which is what I also enjoyed when I read the first book. Alex Callister keeps the tension rising by counting down to an explosive event. We also hear from The Guardsman, who is keen to track Winter down and this keeps the pace flying forward as we see Winter sailing closer to danger. She doesn’t know who The Guardsman is, she can only speculate, and this is what makes it all the more dangerous. She is drawing closer and closer to an unknown enemy; all Winter knows is that they want to do her harm.

This is a series which I’m sure I’ll keep returning to. It’s different, action-packed and hugely exciting all the way through. Winter Rising is a thrilling and entertaining read!

Winter Rising is available to buy: