I’m delighted to be sharing my thoughts on The July Girls by Phoebe Locke on my blog today. 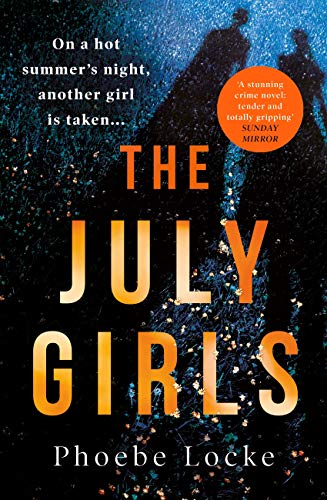 Every year, on the same night in July, a woman is taken from the streets of London; snatched by a killer who moves through the city like a ghost.

Addie has a secret. On the morning of her tenth birthday, four bombs were detonated across the capital. That night her dad came home covered in blood. She thought he was hurt in the attacks – but then her sister Jessie found a missing woman’s purse hidden in his room.

Jessie says they mustn’t tell. She says there’s nothing to worry about. But when she takes a job looking after the woman’s baby daughter, Addie starts to realise that her big sister doesn’t always tell her the whole story. And that the secrets they’re keeping may start costing lives . . .

I can’t believe that it’s taken me this long to read The July Girls. I read Phoebe Locke’s debut novel, The Tall Man a couple of years ago and when this book was released, I heard so many good things about it from fellow bloggers. Phoebe’s writing draws you into the story right from the first page. In her latest book, her narrator is ten-year-old Addie, and it follows her through into her teenage years. Addie is the daughter of a suspected serial killer who has been targeting young women for years. One girl always disappears on the same night in July every year, the day of Addie’s birthday. Addie is also the police’s only hope of catching him.

I thought Addie’s voice in this book was really strong. On Addie’s tenth birthday, bombs are detonated across London and later on in the evening, Addie’s father returns home covered in blood. You can see just how frightened and confused she is when she begins to understand what her father has done. Phoebe Locke also creates a sense of fear that Addie’s father will come after her and that she and her sister, Jessie, aren’t safe. What is even creepier is that every year, for her birthday, Addie receives a gift in the post, an item which she suspects belonged to her father’s victims.

I was nine-years-old at the time of the 7-7 bombings, which happened six days before my tenth birthday, so it is not something that I specifically remember happening. This is what made it interesting for me, seeing everything unfold through Addie’s eyes. Although Addie knows that something terrible has happened, it seems to drift over her head; she is more concerned about the plans for later on in the afternoon as it is her birthday. Phoebe Locke captured the horror of what happened in her writing, even though it does not have a direct impact on the story.

I really liked Addie’s relationship that she had with her sister, Jessie. Jessie is the only motherly figure Addie has ever had, and you can see that they would do anything for each other. Jessie intrigued me as well. She is a few years older than Addie, and she seems to know about the crimes their father is responsible for. It made me wonder what she knew, and I kept turning the pages to find out the answers. Addie is also desperately craving answers about her mother and her father as well.

The July Girls isn’t a fast-paced book, but the suspense and tension build as the year’s progress when Addie begins to gain more knowledge about her father and her past. Phoebe Locke delivers an unpredictable ending that I did not see coming. This book is the perfect summer read.

The July Girls is available to buy:

4 thoughts on “The July Girls by Phoebe Locke #bookreview”