I’m delighted to be kicking off the blog tour for The Bone Jar by S W Kane on my blog today. With thanks to Anne Cater from Random Things Tours for inviting me to take part. 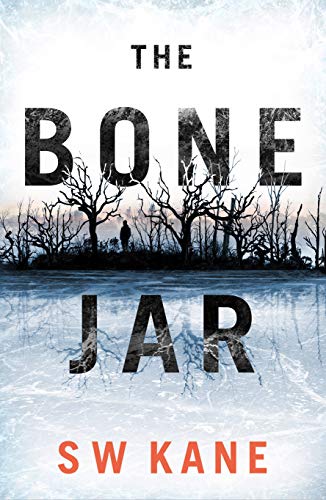 The body of an elderly woman has been found in the bowels of a derelict asylum on the banks of the Thames. As Detective Lew Kirby and his partner begin their investigation, another body is discovered in the river nearby. How are the two murders connected?

Before long, the secrets of Blackwater Asylum begin to reveal themselves. There are rumours about underground bunkers and secret rooms, unspeakable psychological experimentation, and a dark force that haunts the ruins, trying to pull back in all those who attempt to escape. Urban explorer Connie Darke, whose sister died in a freak accident at the asylum, is determined to help Lew expose its grisly past. Meanwhile Lew discovers a devastating family secret that threatens to turn his life upside down.

As his world crumbles around him, Lew must put the pieces of the puzzle together to keep the killer from striking again. Only an eccentric former patient really knows the truth—but will he reveal it to Lew before it’s too late?

The Bone Jar is a complex, chilling and an atmospheric police procedural by S W Kane. London is in the grips of one of the worst snowstorms for decades. When the body of an elderly woman is discovered in an abandoned asylum, scheduled for demolition, the police soon realise that this case isn’t going to be easy to solve. But who could have murdered someone so vulnerable? As they speak to people who knew the murdered woman, including her family, they uncover conflicting accounts about her. Was she a saint, or was she evil? Who held such a bad grudge against her that they wanted to see her dead?

The old asylum, Blackwater, which becomes the scene of the crime, gave the book a very haunting feeling. With the discovery of the body, it seemed to me that there were many undiscovered secrets about the place. Although the setting is near enough abandoned, there is one man who still lives there, who managed to claim squatter’s rights. Raymond Sweet is a former patient, but he isn’t willing to leave the area, even though he has been offered a handsome sum of money by the developers to do so. I wanted to know what he knew about the place, and it’s past. What went on when Raymond was a patient there? Did he know anything about the murdered woman? Raymond also has a secret which he is keen to protect at all costs.

As the plot developed, I became more and more intrigued about the woman, especially when dark secrets about her past were revealed. I was never able to guess how the plot was going to unfold and S W Kane built up the tension really well as the book came to a close.

I also really liked the two main characters. DI Lew Kirby is the detective working on the case, and I thought his character was well developed. He has a love for old cars but hates the police-issue Corsa he drives. Even his mother calls it a ‘student car.’ S W Kane also introduces us to Connie, an urban explorer who has a keen interest in the asylum. Both Connie and Lew are two really engaging characters who I would like to see explored further.

I have heard that The Bone Jar is the first book in a new trilogy and I’m excited to read what S W Kane has in store for us next. I highly recommend this book.

The Bone Jar is available to buy: