I’m delighted to be joining the blog tour for The Waiting Rooms by Eve Smith on my blog today. With thanks to Anne Cater from Random Things Tours for inviting me to take part. 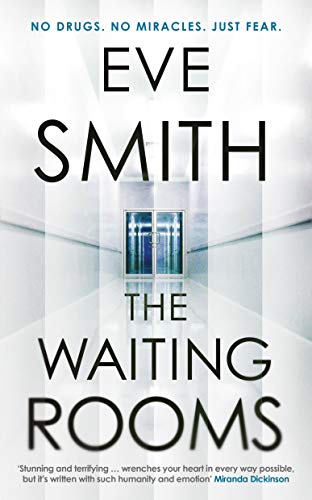 Decades of spiralling drug resistance have unleashed a global antibiotic crisis. Ordinary infections are untreatable, and a scratch from a pet can kill. A sacrifice is required to keep the majority safe: no one over seventy is allowed new antibiotics. The elderly are sent to hospitals nicknamed ‘The Waiting Rooms’ … hospitals where no one ever gets well.

Twenty years after the crisis takes hold, Kate begins a search for her birth mother, armed only with her name and her age. As Kate unearths disturbing facts about her mother’s past, she puts her family in danger and risks losing everything. Because Kate is not the only secret that her mother is hiding. Someone else is looking for her, too.

Sweeping from an all-too-real modern Britain to a pre-crisis South Africa, The Waiting Rooms is epic in scope, richly populated with unforgettable characters, and a tense, haunting vision of a future that is only a few mutations away.

If I’d read The Waiting Rooms a year ago, I think I would have thought that the idea of a global antibiotic crisis was something very far off in the future, beyond my lifetime. Then the coronavirus pandemic happened, and this idea became cemented in my mind as a terrifying possibility. This novel couldn’t be more timely. The Waiting Rooms is one of the most original reads I’ve recently read.

In Eve Smith’s debut novel, once you reach the age of seventy, you’re virtually written off by society. What the current crisis in the world has shown us is how vulnerable we are, and how we often take antibiotics and other pills for granted. We think of plagues and a health crisis as something associated with the medieval period, or at least I did, up until now. The thought that once you hit a certain age, you will be denied any lifesaving medicine is scary; you simply expect the health service to always be there for you.

We meet the lead character Kate during a delicate situation. She is having a meeting with a young couple, and they are talking about ending the life of the young woman’s father. The tension in the room is high. But this is Kate’s job, and this is her reality day in day out. Instead of being able to care for her patients as she would like to do, she has to administer the drug that will let them drift off peacefully. And if this isn’t hard enough for Kate, she is accused of heinous things by angry protesters including being a murderer. Kate is also desperate to find her birth mother, who gave her up for adoption soon after her birth. But as Kate tries to make contact, she finds out that her mother has put measures in place to stop her. But why wouldn’t she want to meet her daughter?

We’re also introduced to Lily, who is fast approaching her seventieth birthday. Lily is residing in a top-notch care home where fear is even more palatable. There are strict quarantine measures in place, much like there is today and even the tiniest scratch could mean the end for you. Lily also has a secret which she is desperately trying to keep covered up. Her worst fear is that someone will discover it.

Another voice we hear from is Mary. Eve Smith takes us back to twenty-seven years prior to the crisis happening. Mary is a scientist currently living in South Africa. She is twenty-three when she begins a relationship with Dr Bekker when they both discover that they share an interest in botany. I thought this part of the novel was really intriguing, and I wondered how it was going to feed into what was happening in the present. There is also tension in these scenes as well, as Eve Smith gives us an insight into what’s happening around the world with new outbreaks of diseases. I also loved the description of the South African landscape, which Eve Smith describes really well. Although it soon becomes clear how Mary’s story is connected to Lily’s, Eve Smith doesn’t reveal the shocking aftermath of these events until much later on in the book.

You can see that Eve Smith has done her research and even though it is a scary realistic prospect, I hope that this doesn’t happen until well beyond my time. I found the ending sad but very satisfying. The Waiting Rooms is one of those books which I’m sure you won’t be forgetting about in a hurry.

The Waiting Rooms is available to buy: