I’m delighted to be sharing my thoughts on the second book by Judith O’Reilly, to feature ex-spy, Michael North, Curse the Day, on my blog today. 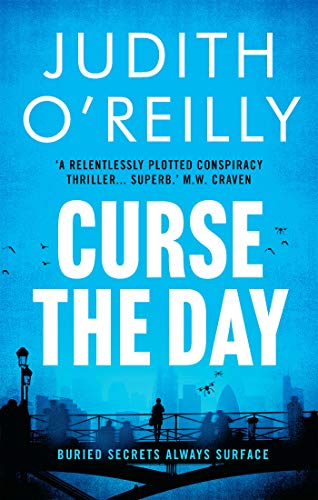 At a global tech gala hosted at the British Museum, scientist Tobias Hawke is due to unveil an astonishing breakthrough. His AI system appears to have reached consciousness, making Hawke the leading light in his field.

But when terrorists storm the building, they don’t just leave chaos in their wake. They seize Hawke’s masterwork, sparking a chain reaction of explosive events which could end the world as we know it.

Michael North, ex-assassin and spy-for-hire, must find the killers and recover the AI. But he can’t do it alone. Hawke’s wife, Esme, and teenage hacker, Fangfang, have their own reasons to help complete North’s mission – and together they unravel a dark and deadly conspiracy which stretches right to the top of the British elite.

Can North survive long enough to uncover the whole truth? Or is it already too late for humanity?

A couple of years ago, I read Killing State by Judith O’Reilly, and finally, she is back with another high octane read which pulls you in from the first page and doesn’t let you go. Curse the Day is the second thriller to feature ex-spy, Michael North. Set in a not too distant future, humanity is on the brink of a huge artificial intelligence breakthrough. ‘Syd,’ a machine learning device, has been developed and is believed to be the first machine to have a conscience. Is this humanities greatest achievement, or does this spell the end for our species?

Michael North is a brilliant creation. At the beginning of this book, he has truly lost his way and is slowly drinking himself to death in Belgium. Michael is in mourning for his girlfriend, who was murdered, but he also vows to catch up with those responsible so he can seek his revenge. But he isn’t going to be left in this state for long. He is soon asked to protect Esme Hawke following a horrific attack in her home. Michael also has a bullet lodged in his brain, which surgery has been unable to move. He is literally a ‘dead man walking,’ one sudden jerk or even a sneeze could set the bullet loose, and when that happens, it will kill him. This also adds to the tension as you know that any moment could mean the end for Michael.

Judith O’Reilly opens the book in a very dramatic way as Esme Hawke is attacked in her own home after disturbing a burglar. Right from the get-go, I wanted to know why their home had been targeted and what it was that she and her husband had that made them a target.

In this version of reality, Britain is leading the way with the development of artificial intelligence. Countries around the world are fighting to catch up, so it is no wonder that Esme and her husband have attracted the attention of many people and governments around the world. They are about to unveil Esme’s husband’s latest creation, a machine capable of human thought. But as time counts down to the launch, it is quickly brought to Esme and Michael North’s attention that ‘Syd,’ will be capable of wiping out humanity once she is launched into the world. The scary thing is, is that they only have the matter of a few hours to stop this from happening.

Curse the Day is crying out to be made into a Hollywood film. The pace never lets up, and Judith’s writing kept me flying through the pages as the book raced towards its dramatic conclusion. I promise you; you will find this book very difficult to put down. I can’t wait to see where Judith O’Reilly takes the series next.

Curse the Day is available to buy: