I’m delighted to be sharing my thoughts on the new psychological thriller by T.M. Logan, The Catch on my blog today. 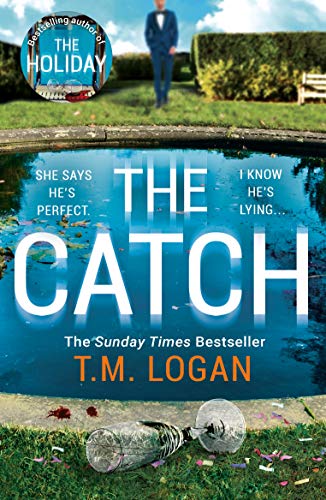 He caught me watching, and our eyes met. That was when it hit me.
There was something not quite right about my daughter’s new boyfriend . . .

Ed finally meets his daughter’s boyfriend for the first time. Smart, successful and handsome, Ryan appears to be a real catch. Then Abbie announces their plan to get married.

There’s just one problem. Ed thinks Ryan is lying to them.

Who would you believe?

All of Ed’s instincts tell him his daughter is in terrible danger – but no-one else can see it. With the wedding date approaching fast, Ed sets out to uncover Ryan’s secrets, before it’s too late . . .

I think The Catch is T.M. Logan’s best novel yet and I think it is definitely my favourite of his books so far. I flew through this book, and I devoured it all within just a couple of days.

When Abbey brings home her new boyfriend, Ryan, for the first time, her father, Ed immediately notices something odd about him. Outwardly, Ryan seems perfect, but Ed sees something dark within him. But is he just being paranoid? Abbey and her mother certainly think so. When Abbey and Ryan announce they are getting married in six weeks time, Ed is determined to stop it. Ed can’t shake off the bad feeling he has about Ryan, and he won’t let his daughter make the wrong decision. But is Ed only causing a rift with his own family?

T.M. Logan always manages to get the tension going in his books very early on. I knew there was something not quite right with Ryan, right from the moment Ed first claps eyes on him. From the start, I was rooting for him to find the answers. As the book progresses, T.M. Logan keeps the tension turning up a notch as the countdown to the wedding begins. Ed knows that he only has limited time to find the truth about Ryan. This is what keeps the tension going as Ed starts to delve into Ryan’s past, and Ed begins to use surveillance to track Ryan’s movements. But this action Ed was taking made me think that he was putting himself in unnecessary danger. At this point, I didn’t know if it would be a good thing for Ed to stop what he was doing and listen to his wife and daughter, or continue on his path.

T.M. Logan creates an air of mystery about Ryan. As Ed goes after him, I was never sure if there was something dark and mysterious in his past. I definitely thought that there was something he was hiding, but there could also have been an innocent explanation of why this could be the case. As T.M. Logan begins to reveal Ryan’s true backstory, I wanted to see how Ryan and Ed were going to react. What course of action was Ryan going to take next? This is what leads to a nail-biting finale as I could see that things could go either way for Ed and his family. I raced through the final pages to find out what was going to happen.

T.M. Logan always manages to tell an entertaining story, and he keeps you utterly gripped to his writing. If you’re a lover of psychological thrillers and if you haven’t read any of his books yet, then you don’t know what you’re missing out on. Top stuff!

The Catch is available to buy:

12 thoughts on “The Catch by T.M. Logan #bookreview”