I’m finally catching up on Kate Medina’s Dr Jessie Flynn series and a few days ago I finished the second book, Scared to Death which I am sharing my thoughts on today. 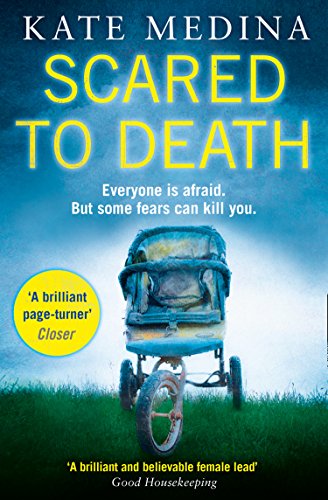 Everyone is afraid. But some fears can kill you.

A gripping new thriller featuring a brilliantly complex psychologist, Dr Jessie Flynn, who struggles with a dark past.

Sometimes you should be frightened of the dark…

A baby is abandoned in the middle of the night. DI Bobby ‘Marilyn’ Simmons suspects the father is planning to take his own life following the violent suicide of his eldest son Danny a year earlier.

Meanwhile an investigation begins into the murder of trainee soldier Stephen Foster. Just sixteen years old, he has been stabbed in the neck and left to die in the woods.

When psychologist Dr Jessie Flynn sees connections between the deaths of Stephen and Danny, she fears a third traumatized young man faces the same fate…

Dr Jessie Flynn is back in the second book in Kate Medina’s new series, Scared to Death. The discovery of a baby left abandoned in a pram at a hospital prompts the investigating team to get in touch with Jessie. It is believed that the baby has links to a military family. It would have to been someone in a desperate situation to leave the baby behind and with no contact details. Who could do such a thing? But as an investigation begins into the suspicious circumstances, Jessie is called away again when the body of sixteen-year-old boy has been found. But the strange events don’t end here and soon Jessie finds herself pulled into a deeper mystery which has devastating consequences for those involved.

I was a huge fan of Kate Medina’s first book in this series, Fire Damage, which I read a few years ago now, and I can’t believe it has taken me this long to catch up. Jessie is such an intriguing character who is really likeable. Her past is a chilling one and in this novel, we begin to learn more details about Jessie. Kate Medina also explores Jessie’s relationship with her father who she is estranged from. He has been trying to get back in contact with her, but Jessie is less than keen to grant him his wish. You can also see that her father isn’t willing to give up easily.

Jessie is a psychologist for the military and she is currently having sessions with one young man who they believe to be at risk of committing suicide. Jessie is determined to get to the root cause of the man’s problems, but she has no idea how they are connected to the other investigations she is involved in.

I really like Jessie’s friendship with her neighbour, Ahmose, who is one of the most likeable characters out of the series. Although he is only a minor character, he always manages to make me smile and I think he would be a great friend and neighbour for anyone to have.

The parts I find really interesting about this series is Jessie’s work. Kate Medina is a psychologist and you can see from her writing that this is an area that she knows a lot about. But the added depth to Jessie’s character is what makes this part of the novel far more intriguing. Jessie was once in a psychiatric hospital and you can see that she has deeper understanding of what her patients are going through.

Short and pacy chapters keep the pace flying forward. Scared to Death is an excellent addition to this series and I can’t wait to catch up on book three.

Scared to Death is available to buy:

4 thoughts on “Scared to Death by Kate Medina #bookreview”