I’m delighted to be sharing my thoughts on The Unbroken by Alex Caan today on my blog. With thanks to Sarah Hardy from Books on the Bright Side Publicity for inviting me to take part. 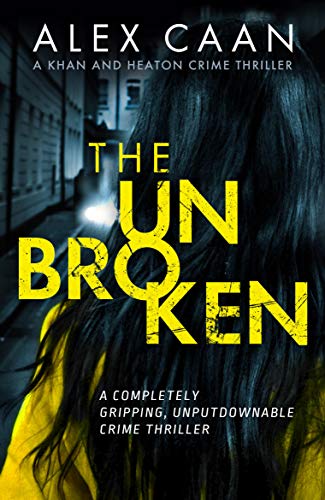 Millie didn’t get time to think. The car door was pulled open and she was dragged out, her screams loud and raw, as she kicked and fought. She called out for Oscar, again and again, screaming for help.

But he never came.

It was the wedding of the year. Millie Beaumont marrying billionaire playboy Oscar Hayat, the eyes of the world watching.

But the dream turns into a nightmare when Millie and Oscar are brutally abducted while on honeymoon. Millie is killed, her body dumped in London. Oscar is still
missing…

Enter DS Moomy Khan and DI Sarah Heaton – not your typical police officers. Moomy is running from her own troubled past, while Sarah is having to live with the hard choices she has made. Yet they will stop at nothing to find Millie’s murderers and track down Oscar. Only a family as high profile as the Hayats have enemies lurking in every corner – have they taken the ultimate revenge, or is someone else behind the death and kidnapping?

And
can Moomy and Sarah find Oscar – before time runs out and he suffers the same fate as his wife?

Alex Caan has returned to the world of crime in his latest novel, The Unbroken and he explores the world of the seriously wealthy and introduces to a new, diverse cast of characters who really make this book feel fresh in the crime fiction genre. It really does make you look closely at the idea that there seems to be one law for a select few and one law for the rest of us.

For me, what made this novel stand out were the two lead detectives, DS Moomy and DI Heaton.  While they both practise the Muslim faith, they have very opposing views. I think this is a much more character-driven crime novel than it is plot-driven, but I really liked this. Alex Caan still kept me invested in the main story, and I wanted to know who was behind the crime that takes place.

DS Moomy Khan grew up a Muslim and has spent her life trying to fight back against tradition and what is expected of her by her family and her religion. It does seem that she is still trying to work out if she believes in her faith. DI Sarah Heaton, however, has recently converted, having been brought up in a Christian family in England. I was really intrigued by DI Heaton, and I wondered what it was that had prompted her to make such a decision.  Alex Caan fleshes out his characters really well, and he has given them interesting back stories which don’t feel overly familiar as so many back stories often do in crime fiction.

The novel opens with the discovery of the body of a young woman, Millie Beaumont, who has recently got married to the son of a self-made billionaire, Oscar, who is due to inherit his family’s fortune. They had recently left the country to go on their honeymoon to Istanbul, so how has she ended up back in London? Was she murdered in Istanbul and her body later dumped here? Or was she kidnapped and transported alive back to the capital? As DS Moomy and DI Heaton delve into the family she had married into, schemes and dark secrets are uncovered, which prompt the detectives to think someone within the family organised Millie’s murder. But could this be the case when their son has gone missing as well?

I loved how Alex Caan delved into the Hayat family and how he examined every part of their lives as his detectives raced to find an answer to the questions behind Millie’s murder. When I first started reading the book, I felt some level of respect for the head of the family, John Hayat, who escaped persecution during the reign of Sadam Hussain and strived to make his fortune. He seemed to be someone who stood on his morals, and he was the only person who seemed to approve of his eldest son’s choice to marry Millie. Despite how much he is worth and what he has achieved in his life, he seems really down to earth. His wife, who inherited her fortune, certainly isn’t pleased with the choice her son has made, and you can see that she has a very controlling personality.

As this series progresses, I’m going to be really intrigued to find out more about DS Moomy and DI Heaton. I hope Alex Caan takes these books a lot further and I will definitely be looking out for when the next one is released.

The Unbroken is available to buy: