I’m delighted to be sharing my review of the first book in the Hannah Weybridge series by Anne Coates, Dancers in the Wind. With thanks to Kelly at Love Books Group for inviting me to take part in the blog tour. 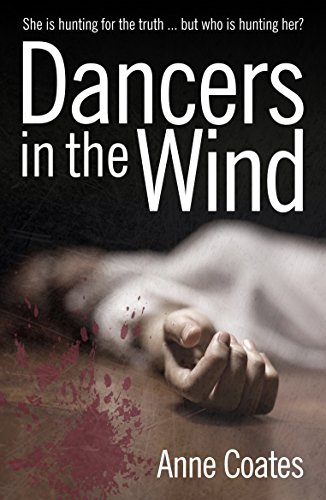 Freelance journalist and single mother Hannah Weybridge is commissioned by a national newspaper to write an investigative article on the notorious red light district in Kings Cross. There she meets prostitute Princess, and police inspector in the vice squad, Tom Jordan. When Princess later arrives on her doorstep beaten up so badly she is barely recognisable, Hannah has to make some tough decisions and is drawn ever deeper into the world of deceit and violence.

Three sex workers are murdered, their deaths covered up in a media blackout, and Hannah herself is under threat. As she comes to realise that the taste for vice reaches into the higher echelons of the great and the good, Hannah realises she must do everything in her power to expose the truth …. and stay alive.

I came to the Hannah Weybridge series a little late when I read the third novel in the series, Songs of Innocence last year. I really wish I’d started from the beginning, so I’m glad that I’ve now had the chance to go back to the start with Dancers in the Wind.

Set in the early 1990s, in Anne Coates’ first novel, the police are trying to track down a brutal killer who has so far murdered three prostitutes in the Kings Cross area. At the same time, freelance journalist, Hannah Weybridge is asked to write an article on prostitution in the area, and she partially becomes involved in the investigation. As part of her research, Hannah speaks to a young woman who goes by the name of Princess. But as Hannah continues to pursue her research, she becomes unwittingly pulled into a dark and dangerous world. Soon she can’t predict if she’ll survive.

There is an edgy feeling to the plot, and Anne Coates has created a sinister atmosphere as Hannah is pulled further and further into this dangerous world. When Hannah first meets Detective Inspector Tom Jordan, who is leading the investigation into the killings, I wasn’t sure if I should trust him. I did feel scared for Hannah as she appeared to grow closer to him, and I began to wonder just how this was going to end for them both.

One of the most intriguing aspects of the plot was Hannah’s relationship with Princess in the wake of their interview. A short while after they first speak to each other, Princess turns up on Hannah’s doorstep after being severely beaten and pleads with Hannah for help. Of course, Hannah is completely unsure of what to do, and at first, she is reluctant to help Princess, fearing for her and her daughter’s safety. At this moment, I wanted to know what it was that Princess had got herself mixed up in and who she was so scared of. Would this have any implications for Hannah and her daughter?

We don’t hear a lot about the police investigation, only when Hannah is in the company of Tom Jordan, but I liked the feel this gave the book. Hannah is in the realms of the unknown here. This is a far more terrifying prospect for her as she doesn’t fully understand what she is dealing with. If she had been working for the police, she would know what leads they were following and if they would have anyone in the frame for the murders.

Dancers in the Wind is a strong debut by Anne Coates. The short chapters made it a pacey read, and there was always that hook that kept me reading on. The storyline is engaging, and it leads to a satisfactory ending with perhaps room for further exploration in the future. I will be making sure I read the second book in the series soon.

If you would like to purchase Dancers in the Wind, you can do so by clicking on one of the following links below.