Do I have an exciting cover reveal for you today. I’m delighted to be able to share with you the cover for the debut novel by Amer Anwar Brothers In Blood. I read and reviewed this book last year on my blog when it was previously titled Western Fringes and it was one of my favourite reads of 2017. Now it is being re-published by Dialogue Books, an imprint of Little Brown which I was really excited to hear about. So when I was asked to take part in the cover reveal I knew that ‘yes’ was going to be the obvious answer straight away.  This book is definitely for you if you enjoy action-packed thrillers.

Before I reveal the cover here’s the blurb.

A Sikh girl on the run. A Muslim ex-con who has to find her. A whole heap of trouble.

“An engaging hero, a cunning plot, and a fascinating journey into Southall’s underworld. We’ll be hearing a lot more from Amer Anwar.”
– Mick Herron

“A fine debut novel. With his engaging characters and skilful plotting, Anwar brings a fresh and exciting new voice to the genre.”
– Ann Cleeves

And so without any further ado here is the cover for Brothers in Blood. Can I have a drum roll please . . .

Brothers in Blood is out on the 6th September 2018. And if you would like to pre-order you can do so by following the link below.

Amer Anwar grew up in West London. After leaving college he had a variety of jobs, including; warehouse assistant, comic book lettering artist, a driver for emergency doctors and chalet rep in the French Alps. He eventually landed a job as a creative artworker/graphic designer and spent the next decade and a half producing artwork, mainly for the home entertainment industry. He has an MA in Creative Writing from Birkbeck, University of London and is a winner of the Crime Writers’ Association Debut Dagger Award. Western Fringes is his first novel. For everything else, he has an alibi. It wasn’t him. He was never there. 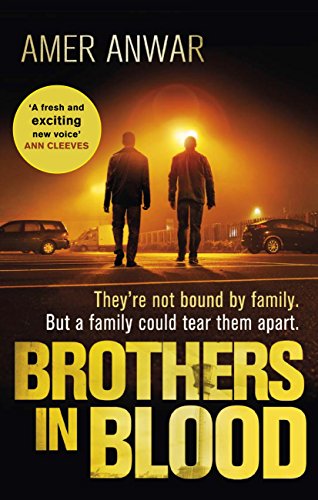 THEY’RE NOT BOUND BY FAMILY. BUT A FAMILY COULD TEAR THEM APART.

This is such a brilliant book; it is definitely one of my favourite reads of this year.

There is action right from the first page, and there are some brilliant, well developed characters. I’m hoping that Zaq and Jags are going to return in a future book as I would certainly like to catch up with them again. There was some exceptional dialogue between them and a good dose of humour which is what made them both really likeable. In fact, I think some of the best scenes were when Zaq and Jags were alone together, they were a pair who really gelled well together.

Zaq Khan has recently been released from prison after serving five years for manslaughter. He is keen to keep his head down and stay away from the criminal underworld. As far as he is concerned, he has done his time and he doesn’t want to go back there. But his boss has other ideas. His boss asks for his help to track down his daughter, Rita, who has disappeared to escape an arranged marriage. Zaq is reluctant to help out but when his boss threatens to put him back in prison what choice does he have? But Zaq soon realises that he has become a part of something much bigger and it may be tricky for him to get out alive.

Brothers In Blood is an explosive debut from a fresh new voice. Amer is a very talented writer when it comes to dialogue and especially the fight scenes. This is one of those books which I would like to see on the big screen, I think it would translate to film really well.

The final chapters of the book really did have me gripping the pages as it raced towards its climax. After finishing the last chapter, Amer has left me wondering what’s happening with his characters now, especially Rita’s family. This is an exceptional debut. I’m hoping we don’t have to wait too long for another book. Highly recommended.