I’m delighted to be sharing my thoughts on Bury Them Deep by James Oswald on my blog today as part of the blog tour. With thanks to Anne Cater from Random Things Tours for inviting me to take part. 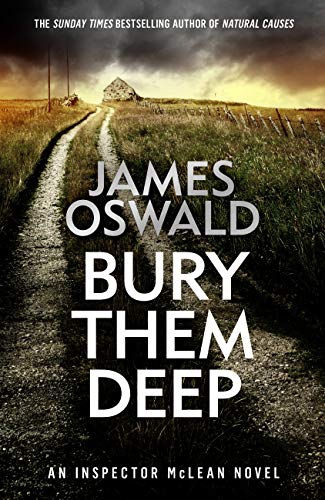 When a member of the Police Scotland team fails to clock-in for work, concern for her whereabouts is immediate… and the discovery of her burnt-out car in remote woodland to the south of Edinburgh sets off a desperate search for the missing woman.

Meanwhile, DCI Tony McLean and the team are preparing for a major anti-corruption operation – one which may raise the ire of more than a few powerful people in the city. Is Anya Renfrew’s disappearance a co-incidence or related to the case?

McLean’s investigations suggest that perhaps that Anya isn’t the first woman to have mysteriously vanished in these ancient hills. Once again, McLean can’t shake the feeling that there is a far greater evil at work here…

James Oswald’s Inspector McLean novels are a top crime series which you need to be following. Over the last month, I was determined to catch up on the previous five books which I hadn’t yet got round to reading. I would say that they can all be read as standalones but to get the most out of the character development, I would highly recommend reading the series from the beginning. Although each plot is different, there are key character plot points which are looked at throughout the series. But if you do read this book on its own, I’m sure you will want to go back and discover where the series all began. Before you know it you will have devoured them all; it certainly didn’t take me very long.

In the tenth book in the series, Bury Them Deep, concerns are raised when a police officer fails to turn up for work. Anya Renfrew has never taken a day off sick, so this is marked as highly unusual by her colleagues, particularly when she doesn’t return their phone calls. But her disappearance also prompts interventions from top government officials including the First Minister. Before her disappearance, Anya was working on a highly sensitive case which could risk the countries reputation if anything gets out. The police step up their efforts to find her, and it isn’t long before McLean discovers a link to a disturbing local legend that has been spoken about for centuries.

The case which McLean is following in this book is the most disturbing one in the series, in my opinion. You will soon see why when you read it. I’ve always been fascinated by myths and folklore, and James Oswald explores a really chilling one here which has captured the local’s imagination for years. I was immediately drawn into this story, and James Oswald kept me hooked as Inspector McLean delved further into Anya Renfrew’s private life. They discover that she isn’t quite the person they thought of her to be. This does create a lot of red herrings as the police try to work out Anya’s last known movements, and these investigations take the police places where they certainly didn’t expect to go.

As well as investigating Anya’s disappearance, this novel also sees the return of a previous antagonist from the series, who McLean would rather never hear from again. This is where I think it will be helpful to have read the previous books in the series, but there is still enough information here to read this as a standalone. This was another really intriguing point, like McLean I wanted to know what this person knew about the current case he was working on, and what their true motivations were. I couldn’t really see it being the case that they just wanted to help him.

There were times when the tension was raised so high, particularly when I thought that McLean wasn’t going to be able to solve this case in time. There were scenes when I almost had to look away, but I was so keen to find out what was going to happen. I had to see how McLean was going to get himself out of this one.  You won’t want to tear your eyes away from the page.

I think I have summed up how much I like this series in my previous reviews of these books, so all that’s left for me to say is you’ll absolutely love this book if you’re a fan. And again if you haven’t yet started these books, why haven’t you? You’re missing out on a real treat if you haven’t.

Bury Them Deep is available to buy:

Cold as the Grave