A Window Breaks by C.M. Ewan was released in e-book on Thursday.  I’m sharing my thoughts on my blog today. 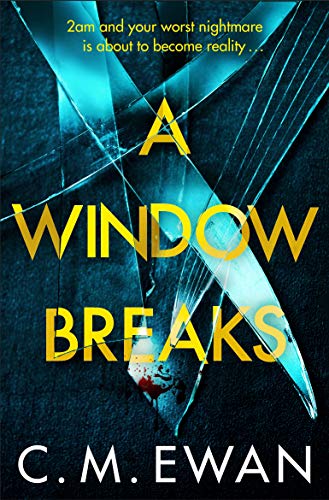 If your family was targeted in the middle of the night, what would you do?

You are asleep. A noise wakes you.
You stir, unsure why, and turn to your wife.
Then you hear it.
Glass. Crunching underfoot.
Your worst fears are about to be realized.
Someone is inside your home.
Your choices are limited.
You can run. Or stay and fight.
What would you do?

I read A Window Breaks by C.M. Ewan really fast. I imagine that it’s everyone’s worst nightmare, to wake up in the middle of the night and find an intruder in your home. It’s a thought that’s never far from your mind when you’re checking doors and windows and making sure everything is locked before you go to bed, especially if you’re on your own.

What was meant to be a short respite for Tom and his family soon turns into a nightmare. They’ve recently suffered their own bereavement after Tom lost his son, Michael, in a car accident along with his son’s girlfriend. But that hasn’t been the end of their troubles. Recently they’ve been the victims of a vicious mugging, and in an attempt to try and overcome the horrors his family have suffered; Tom takes them to Scotland for a break. But things soon take a turn for the worse when Tom wakes early in the morning on their first night and discovers that someone has broken into the lodge. And it is clear that that person is here to harm them.

If you enjoy high octane thrillers, then this is a novel for you. I was drawn into Tom and his family’s personal crises as they are attempting to come to terms with what has happened to them over the past few months. The book does start at a fairly slow pace. But when the action gets going, it really doesn’t stop, and C.M. Ewan took me on a wild ride from the minute the action began.

What made me turn the pages so fast was that I wanted desperately to find out why these men had targeted Tom and his family. Was this somehow connected to the death of Tom’s son? As I was reading, I really couldn’t work out what was going on behind the scenes, which only becomes clearer towards the end of the book.

C.M. Ewan continues to raise the tension as Tom and his family fight to escape the clutches of the men who seem intent on killing them. There were times when I practically held my breath as I waited to see what was going to happen next, when Tom makes each decision, thinking he is doing the best thing to protect his family. I remember feeling so convinced that at any moment this was going to be the point when they were discovered.

But as Tom’s nightmare escalates, we do see snippets of what happened to his son in his final moments. The realisation of the truth does test the characters, and it did make me examine what I would do if I were in their shoes.

Although it is quite a long thriller, it certainly didn’t feel long at all to me as I was reading. The high levels of tension kept me furiously turning those pages in search of the truth. If you’re looking for a thriller that will keep you utterly gripped, then this is the book for you.

If you would like to purchase A Window Breaks, you can do so by clicking on one of the following links below. 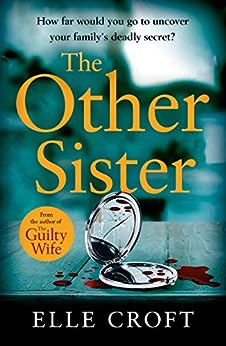 How far would you go…

Gina Mills is desperate to be a newsreader, but her boss – the director of the struggling Channel Eight, won’t help.

Walking home one night, Gina stumbles upon a dead body, and after calling the police, she makes the split-second decision to report the murder live.

When questioned by the police, Gina can’t remember specific details about her discovery, but these memory gaps are explained away as shock.

…to uncover your family’s deadly secret?

But when Gina finds a second body, it’s clear she’s being targeted. But why?

And how is this connected to the death of Gina’s younger sister so many years ago?

I was a big fan of Elle Croft’s debut novel The Guilty Wife, which I read a short while ago, so I was excited to pick up her second book The Other Sister. Elle Croft puts her characters in extraordinary situations, but they don’t feel too far-fetched, and in both of her books she has come up with an ingenious plot that is utterly engaging, with characters that hide dark, dark secrets. And her latest is just as gripping as her first.

What I have come to expect from Elle Croft’s writing is that you can never trust any of her characters, and there is always something new to find out about them. In her latest book, a family secret is what holds her plot together, and it is very well plotted. Her characters will have you questioning their motives throughout the book. One of her protagonists, Gina Mill’s, is desperate to be a news reader, and currently, she works for news station Channel 8. She has recently become reacquainted with her brother, Ryan, who she hasn’t seen for many years. When Gina discovers a body one evening, she makes the decision to film the discovery and broadcast the crime scene on Channel 8’s social media channels.

Elle Croft really makes you think about her characters; I wanted to find out what was going to happen to Ryan and Gina, and especially what was hiding in their past, and there are some shocking revelations about them which are dark and chilling. I also liked the detective, who was investigating the deaths of the murdered women and I wanted to see if he was going to get the bottom of what was going on. He knows that there is something more here than meets the eye, but his work colleagues don’t share his opinions and he has to fight to have his opinions heard.

We also go back in time to when Gina and Ryan were children and Elle Croft begins to reveal the truth about their childhood, and the events in the past which have formed the basis for what is happening in their lives today. In these chapters, you are still never sure about what is happening and which characters are behind the terrible events that are taking place.

I was chilled by the final scenes in this book, which will keep you thinking about the plot and those final twists which explore a terrifying idea and possibility. This is a dark, immersive crime thriller which has some brilliant characters tangled in a web of family secrets, lies and haunting truths. Once again I enjoyed Elle Croft’s writing which pulls you into the story. The Other Sister is definitely recommended by me.

A successful entrepreneur in the mushroom industry, Jaakko Kaunismaa is a man in his prime. At just 37 years of age, he is shocked when his doctor tells him that he’s dying. What is more, the cause is discovered to be prolonged exposure to toxins; in other words, someone has slowly but surely been poisoning him. Determined to find out who wants him dead, Jaakko embarks on a suspenseful rollercoaster journey full of unusual characters, bizarre situations and unexpected twists. With a nod to Fargo and the best elements of the Scandinavian noir tradition, The Man Who Died is a page-turning thriller brimming with the blackest comedy surrounding life and death, and love and betrayal, marking a stunning new departure for the King of Helsinki Noir.

Finnish author Antti Tuomainen was an award-winning copywriter when he made his literary debut in 2007 as a suspense author. The critically acclaimed My Brother’s Keeper was published two years later. In 2011 Tuomainen’s third novel, The Healer, was awarded the Clue Award for ‘Best Finnish Crime Novel of 2011’ and was shortlisted for the Glass Key Award. The Finnish press labelled The Healer – the story of a writer desperately searching for his missing wife in a post-apocalyptic Helsinki – ‘unputdownable.’ Two years later in 2013 they crowned Tuomainen ‘The King of Helsinki Noir’ when Dark as My Heart was published. With a piercing and evocative style, Tuomainen is one of the first to challenge the Scandinavian crime genre formula.

The Man Who Died by Antti Tuomainen begins with a startling revelation for our protagonist, Jaakko. Jaakko has been informed by his doctor that he has just weeks or potentially days to live. Jaakko is convinced that he has been murdered and he sets his eyes upon his wife. Can he find out if his wife is involved in his death before his time is up? How long exactly does he have left?

A topic I always find prompts discussion from a group is what would you do if you found out you had a day to live. The question prompts a round of answers: I would raid my bank account; I would eat fast food all day. But what if you thought that you had been murdered? Would you use your final days trying to prove if this was true and to try and find out who did it? I think personally, if this was the situation I was faced with, I would try and spend my final days having fun or at least spending time with friends and relatives.

Many of you will know that I read a lot of crime fiction and to me this book felt very fresh, it’s hard to stand out in such an overcrowded market but I think the author has done just that. There is also plenty of humour in this book which I really liked. We delve into Jaakko’s mind as he contemplates what he has learnt from the doctor and he paints a very philosophical view about our lifetime on this planet.

This is a brilliant book by a talented writer. If you’re looking for something that is a bit different then I would highly recommend The Man Who Died. Thank you to Karen Sullivan at Orenda books for sending me a copy of the book to review and to Anne Cater for inviting me to take part in the blog tour.