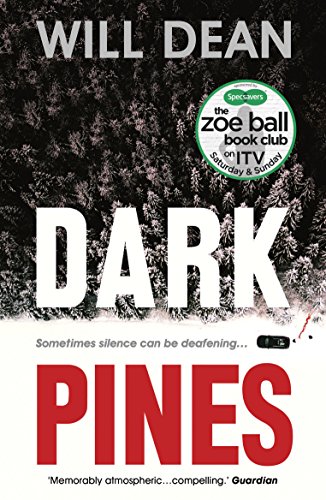 Tuva Moodyson, a deaf reporter on a small-time local paper, is looking for the story that could make her career.

A web of secrets. And an unsolved murder from twenty years ago.

Can Tuva outwit the killer before she becomes the final victim? She’d like to think so. But first she must face her demons and venture far into the deep, dark woods if she wants to stand any chance of getting the hell out of small-time Gavrik.

Deep within a Swedish forest, the body of a huntsman is discovered with his eyes gouged out, and deaf reporter Tuva Moodyson sets out to track down a killer. But is the death linked to a very disturbing series of murders that took place in the 1990s and how can Tuva uncover the truth when the people of the town don’t want her to report it?

Tuva is such an excellent character. After the discovery of the body in the woods, she sets out to investigate the locals, and she speaks to some unsettling people who are very different, but who all live near to each other. Tuva is hoping to get her big break in her career as she is desperate to join one of the nationals in London and she thinks that this case may just be her lucky break.

I loved the sense of menace which gets darker and darker as the novel progresses, making you think that Tuva is getting closer and closer to danger as she starts to unravel the truth. I became quickly immersed in Will’s brilliant writing which is so atmospheric and brilliantly written. I really liked the way he describes the forest and the weather. This is the perfect book to read on a cold winter’s evening, while wrapped up warm of course.

The characters who Tuva speaks to are so intriguing, and they all made me feel just that little bit uncomfortable; particularly the wood carving sisters, who make their living by carving creepy trolls, and the ghostwriter. I was thinking this especially when he was trying to interview Tuva. My own thoughts as to who the killer was were thwarted in the final chapters.

The forest does create an impending sense of doom, very much so when we think about the murders that are taking place there and the ones that took place decades earlier. Every time that Tuva was alone in these woods I was fearful for her, thinking that something was going to happen, or that someone was going to leap out of the trees brandishing a rifle. The forest is a character in its own right, and Will Dean draws on the gloominess and darkness so, so well.

Dark Pines is a chilling first novel from Will Dean. I’m very excited to see where he will take Tuva next. You really don’t want to miss this book.

If you would like to purchase Dark Pines, you can do so by clicking on one of the following links below.