I’m delighted to be joining the blog tour for Endgame by Daniel Cole on my blog today. With thanks to Tracy Fenton from Compulsive Readers for inviting me to take part. 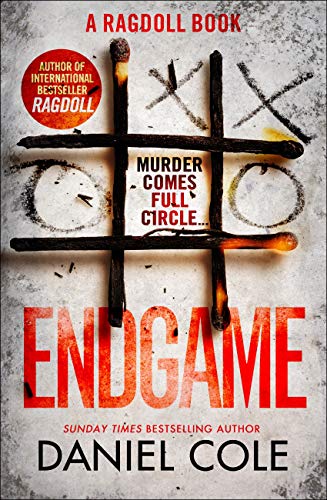 A locked room. A dead body. A secret that went to the grave.

When retired police officer Finlay Shaw is found dead in a locked room, everyone thinks it’s suicide. But disgraced detective William ‘Wolf’ Fawkes isn’t so sure.

Together with his former partner Detective Emily Baxter and private detective Edmunds, Wolf’s team begin to dig into Shaw’s early days on the beat. Was Shaw as innocent as he seemed? Or is there more to his past than he’d ever let on?

But not everyone wants Wolf back – and as his investigation draws him ever deeper into police corruption, it will not only be his career on the line – but the lives of those he holds closest as well…

Wolf is back in Daniel Cole’s third crime thriller, Endgame. After events which took place in Ragdoll, the first book in the series, Wolf is in handcuffs after handing himself into the metropolitan police. But before he is handed a sure to be lengthy prison sentence, he has one final request to make. He wants to oversee the investigation into the death of his friend, Finlay Shaw. The police believe Finlay has committed suicide. Wolf can’t believe that Finlay would do this to them and his partner, Maggie. Wolf is determined to solve the matter once and for all, but as their investigations deepen and as Finlay’s murky past is revisited, they uncover far more than they originally bargained for.

Endgame is a swiftly paced novel which moved along at break-neck speed. I’ve followed this series since the beginning. Daniel Cole continues to write very engaging wit, thoroughly entertaining plots and hugely likeable characters who will keep you coming back for more. My favourite character, who has been since I read the first book, is Baxter. She is the character who I think I have engaged with the most over the course of the three books, probably because of her humour. It was really good to see the team back together in this latest book as, although I enjoyed the second book, this is what I think was missing.

I think what sets Daniel Cole’s books out, in my opinion, is their entertainment value. From the first book, this is what has kept me coming back. I remember so clearly the cliff hanger at the end of the last one, Hangman, which made me so desperate to read Endgame as soon as possible. There is also a very strong cinematic edge to all three books, and I can see them lending so well to the big or small screen. I’m sure I’ll be reading whatever Daniel Cole writes next.

Pacy and addictive this is a series of novels which I highly recommend if you’re looking for a read that you can just sink into right from the very first page.

If you would like to purchase End Game, you can do so by clicking on one of the following links below.

I’m delighted to be joining the blog tour for End Game today, the third and sadly, final book in the Robert Finlay series by Matt Johnson.

Robert Finlay seems to have finally left his SAS past behind him and is settled into his new career as a detective. But when the girlfriend of his former SAS colleague and close friend Kevin Jones is murdered, it’s clear that Finlay’s troubles are far from over. Jones is arrested for the killing, but soon escapes from jail, and Finlay is held responsible for the breakout. Suspended from duty and sure he’s being framed too, our hero teams up with MI5 agent Toni Fellowes to find out who’s behind the conspiracy. Their quest soon reveals a plot that goes to the very heart of the UK’s security services. End Game, the final part in the critically acclaimed Robert Finlay trilogy, sees our hero in an intricately plotted and terrifyingly fast-paced race to uncover the truth and escape those who’d sooner have him dead than be exposed.

End Game is the third and final book in the brilliant Robert Finlay series by Matt Johnson and it is a series which I highly recommend to any thriller seekers. I’m sad to see this series come to an end as I will definitely miss these characters. Matt also writes really well and so I am sure that I’ll be picking up what he writes next as I really like his style. Before you pick up End Game I would recommend that you read the first two books in the series, which began with Wicked Game, although they can all be read as standalones, I feel you would get more enjoyment out of them if you read all three.

It seems that Robert Finlay will never quite be granted his wish of enjoying a quiet life with his wife and two children. He has put his military days behind him; however he has since joined the Metropolitan police as an Inspector. But when his friend’s girlfriend is murdered he is thrown into a chaotic mess as he tries to prove his friend’s innocence. He can’t believe that his friend had any involvement in this woman’s murder. But his friend only makes matters worse when he escapes from jail. And as Robert struggles to clear his name, he learns that someone is plotting to kill them both. Will they both manage to survive?

What I really like about these books is their authenticity. Matt Johnson is a former soldier and police officer, and his own, personal experiences feeds into the Robert Finlay novels. He offers us a fascinating insight into the worlds of policing and spies at the very highest level of security. Although the Robert Finlay novels are works of fiction, Matt does refer to real, historical events which only occurred in this country a few decades ago and this is another part of the plot which I found really interesting and it compelled me to research them.

One of my favourite characters from this series, I would say, would have to be Toni Fellows. She is a force to be reckoned with and I really liked the working relationship that she has with Finlay. If you are on her side, she is a friend who will do anything for you.

End Game is a fitting end to a fantastic series. If you haven’t yet discovered these books and if you’re a fan of action packed, spy thrillers, then you definitely need to add them to your TBR pile. Thank you to Karen Sullivan at Orenda Books for sending me a copy of the book to review and to Anne Cater for inviting me to take part in the blog tour.