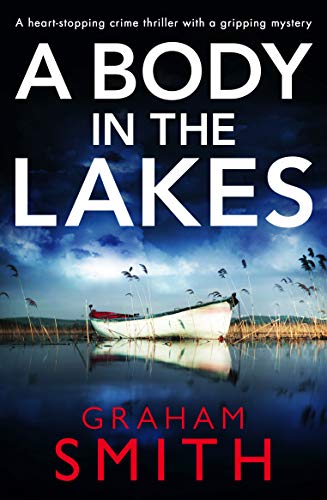 Detective Beth Young has just joined the Cumbrian major crimes team when a body is found posed in a ritualistic manner – arms spread and graceful wings attached – at a crumbling castle in the hills of the Lake District.

The entire police force is on red alert. But Beth begins to feel she’s the only one who can follow the disturbing clues left by the twisted killer. Because she doesn’t think like everyone else. To Beth, crimes are puzzles she can solve. Even if real life is a little harder.

As more bodies are discovered in derelict stately homes across the Lake District, Beth knows she’s in a race against time.

But the killer is looking for another victim to add to his collection… Will Beth be able to save her? Or will he get there first?

Death In The Lakes is the first book in a new series by Graham Smith and the first to feature DC Beth Young. I haven’t read any previous work by Graham before, and I was very impressed with his latest. This is a great introduction to Beth, she is a detective who still has a lot of room to grow, and I’m looking forward to finding out more about her as the series progresses. If you enjoy a good serial killer thriller, then you should definitely pick it up.

Imagine on your wedding day, you discover a body in the grounds of a hotel where you are hosting your big day. This is what happens to Emily Welton when she discovers the body of Angus Keane in the opening chapters, and DC Beth Young is one of the first police officers on the scene after the gruesome discovery. But what sets this murder apart, and really worries the police, is the lengths the killer has gone to make their victim suffer a torturous death, and it soon becomes clear, that Angus isn’t the first victim of this deranged killer and he won’t be the last to die.

Beth is a character who I got on with straight away. You can see she is ambitious; however she does struggle to get on with some of her colleagues at the start of the book. Her boss, DI O’Dowd is a character who I did take time to warm to, but by the second half, I thought that she and Beth were working really well together and O’Dowd became a much more likeable character.

There are some really gruesome details in this book, where we learn about how the killer chooses to murder their victims and these were quite inventive and made this book stand out amongst recent police procedural books I have read. They made me want to find out more about the killer and why they were choosing this particular method to dispose of their victims.

I certainly have no hesitation in recommending this book as a gripping read to crime fiction fans, and I will definitely be buying the next book in the series. Death In The Lakes is a top police procedural novel, and I can’t wait to find out more about the characters.

If you would like to purchase Death in the Lakes, you can do so by clicking on one of the following links below