I’m delighted to be sharing my review of Someone Is Lying by Jenny Blackhurst today on my blog. With thanks to Anne Cater at Random Things Tours for inviting me to take part. 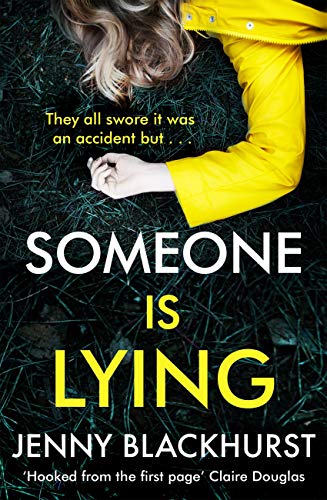 One year after Erica Spencer trips and falls down a flight of stairs at a lavish Halloween party, the residents of the exclusive gated community where she lived have comes to terms with her death and moved on with their lives.

Until one day, a post on the school’s website announces there will be a podcast to expose what really happened on the night of the accident. Six suspects are named, with the podcaster promising to reveal the murderer by the end of the series.

Everyone in this community has secrets to keep, and one of them is already a killer…

Someone is Lying by Jenny Blackhurst is such a suspense-filled read. I devoured this book in just a couple of sittings. Right at the very opening, we hear from Erica who died several months earlier at a Halloween party after falling from a tree house in her neighbour’s garden. But Erica tells us that someone that night is lying about what happened and that her death was far from accidental. And that soon the truth will be revealed.

I love a novel set within a gated community, especially a crime novel. You get a real sense that the person who knows the truth about what happened to Erica is walking among the residents and that they are being pushed to the brink. I wasn’t sure at all what was going to happen to them.

I don’t think I found anyone in the group who become known as the Severn Six, particularly likeable. I did think that some of them did believe that they were better than most people, especially as they lived in an exclusive community. As I learnt more about what had happened on the night Erica died, I really despised some of them. But this made me all the more curious to find out if any of them could possibly have a motive for killing Erica if her death wasn’t an accident.

After we first hear from Erica herself right at the beginning, Jenny next introduces us to someone responsible for a new podcast promising to reveal the truth behind Erica’s death. This rocks the local community, and soon, those who were close to Erica find themselves under the spotlight as the podcaster reveals them to be the prime suspects.

I really liked the idea of the podcasts as this caused real unease among the characters which Jenny brought to life really well. They all become very anxious as to what this will mean for their community and for their futures. There are lots of interesting revelations about the characters that come to light, I think some I initially did find confusing as I was reading, but it made for compelling reading as the full details of their lives unfolded. I was desperate to find out who was behind the podcasts and what they would finally reveal about the night that Erica died.

There is a really sinister edge to this book, and this continues to build as the final plot details are revealed. Gripping and totally immersive, I thoroughly enjoyed it.

If you would like to purchase Someone Is Lying, you can do so by clicking on one of the following links below.

I’m delighted to be taking part in the blog tour for The Night She Died by Jenny Blackhurst, with thanks to Anne Cater at Random Things Tours for inviting me to take part, and as part of the blog tour I have one paperback copy of the book to giveaway. To be in with the chance of winning, all you have to do is leave a comment at the end of this post and tell me why you want to read this book. If you would like to find out a little more about it, I’ve included the blurb below. The competition closes at midnight on Friday, 14th September 2018 and one winner will be drawn at random. Good luck!

The addictive new psychological thriller from Jenny Blackhurst, the #1 eBook-bestselling author of HOW I LOST YOU. Full of dark drama and unexpected twists, this will suit fans of FRIEND REQUEST, CLOSE TO HOME, and THE GUILTY WIFE.

On her own wedding night, beautiful and complicated Evie White leaps off a cliff to her death.

What drove her to commit this terrible act? It’s left to her best friend and her husband to unravel the sinister mystery.

Following a twisted trail of clues leading to Evie’s darkest secrets, they begin to realize they never knew the real Evie at all…