It’s my great pleasure to be joining the blog tour for Blood Song by Johana Gustawsson on my blog today. With thanks to Anne Cater at Random Things Tours for inviting me to take part. 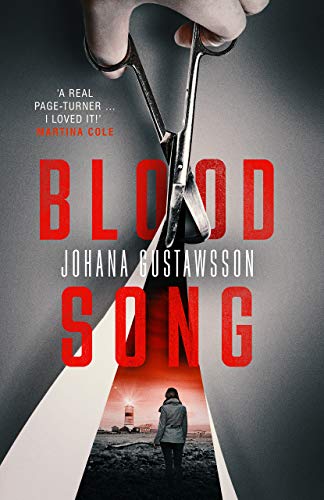 The action swings from London to Sweden, and then back into the past, to Franco’s Spain, as Roy & Castells hunt a monstrous killer … in the lastest instalment of Johana Gustawsson’s award-winning series

Spain, 1938: The country is wracked by civil war, and as Valencia falls to Franco’s brutal dictatorship, Republican Therese witnesses the murders of her family. Captured and sent to the notorious Las Ventas women’s prison, Therese gives birth to a daughter who is forcibly taken from her.

Falkenberg, Sweden, 2016: A wealthy family is found savagely murdered in their luxurious home. Discovering that her parents have been slaughtered, Aliénor Lindbergh, a new recruit to the UK’s Scotland Yard, rushes back to Sweden and finds her hometown rocked by the massacre.

Profiler Emily Roy joins forces with Aliénor and soon finds herself on the trail of a monstrous and prolific killer. Little does she realise that this killer is about to change the life of her colleague, true-crime writer Alexis Castells. Joining forces once again, Roy and Castells’ investigation takes them from the Swedish fertility clinics of the present day back to the terror of Franco’s rule, and the horrifying events that took place in Spanish orphanages under its rule.

Terrifying, vivid and recounted at breakneck speed, Blood Song is not only a riveting thriller and an examination of corruption in the fertility industry, but a shocking reminder of the atrocities of Spain’s dictatorship, in the latest, stunning installment in the award-winning Roy & Castells series.

Johana Gustawssson never ceases to amaze me with her plots. Her books are very different to what is out there in the mainstream crime fiction market at the moment, and this is what makes them so appealing and so fresh. So if you are looking for a crime series that is different and will keep you gripped, I would highly recommend that you read these books.

As was the case in her last two books, there is a historical element to her latest novel, Blood Song. And this is what I really like about her books. This time Johana takes us back to 1930s Spain during the reign of the dictator, Francisco Franco and she shines a light on this brutal time period in Spanish history. But how exactly does this part of history have a bearing on what is happening in the present, when a prestigious Swedish family are brutally murdered?

Although I travel to Spain on holiday every year, I have remained completely unaware of what happened during the period when Franco ruled the country. I don’t think I was ever taught about it at school. I often hear references to him, but I have never thought to ask for more details on what happened during this time. Johana paints a vivid portrayal here of what happened, and some parts do make for a tough read, and she doesn’t shy away from the brutality inflicted upon the Spanish people. But it is enlightening and important to the story. The scenes where Johana takes us to Spain are very dark and sinister.

What I’ve really liked about Johana’s books is how she puts her own spin on historical events. Her previous book, Keeper, was based on the Jack the Ripper murders and her debut, Block 46, was partly based in a Nazi concentration camp during the Second World War. The historical accuracy is all there, and it feels very authentic. Johana then uses her imagination to shape how the past has an effect on the future. This is what makes her writing and her plots unique and fascinating.

The plot pulls together in a very clever way. When I start Johana’s books, I always wonder, how she’ll tighten everything up and make the plot feel realistic, but it works very well. When you get to the end of her books, everything does make so much sense, and that’s what makes it feel very satisfactory as well. The structure of the story flows well and never once did I feel lost. I often feel that sometimes, this can be the case when stories jump through multiple time zones.

Blood Song is an intelligent, captivating and an original piece of writing. It’s very well written and expertly translated by David Warriner. This is a series which is very evocative, haunting and skilfully written.

I’m looking forward to reading what Johana writes next.

If you would like to purchase Blood Song, you can do so by clicking on one of the following links below.

Falkenberg, Sweden. The mutilated body of talented young jewellery designer, Linnea Blix, is found in a snow-swept marina.
Hampstead Heath, London. The body of a young boy is discovered with similar wounds to Linnea’s.
Buchenwald Concentration Camp, 1944. In the midst of the hell of the Holocaust, Erich Hebner will do anything to see himself as a human again.

Are the two murders the work of a serial killer, and how are they connected to shocking events at Buchenwald?

Emily Roy, a profiler on loan to Scotland Yard from the Canadian Royal Mounted Police, joins up with Linnea’s friend, French truecrime writer Alexis Castells, to investigate the puzzling case. They travel between Sweden and London, and then deep into the past, as a startling and terrifying connection comes to light.

Plumbing the darkness and the horrific evidence of the nature of evil, Block 46 is a multi-layered, sweeping and evocative thriller that heralds a stunning new voice in French Noir.

I was blown away by Block 46, I can’t believe that it’s taken me this long to get round to it. After reading so many great reviews from fellow bloggers, I knew I was in for a treat, and it didn’t disappoint. It’s another riveting read from Orenda Books, and Johana Gustawsson is another author who I am excited to read more from.

When the body of jewellery designer Linnea Blix is discovered in Sweden, investigators believe that there may be a link between her murder and the murder of a young boy in London who was found with similar injuries. The investigators believe that these recent murders could also be linked to killings which have taken place across decades. In 1944, we meet Erich Hebner who has been imprisoned in Buchenwald concentration camp. How is Erich connected to the events which are happening in the present, what really happened at the camp all those years ago?

Block 46, is a powerful and emotive story that explores a devastating time period in our history, the Holocaust. I really had no idea of the direction which Johana was going to take us. The subject of the concentration camps is an area which Johana has researched impeccably well; what Johana has also done in this book is make us, the reader, realise how important it is for us to learn about what happened in these times, to ensure that this atrocity never happens again. The scenes in which Johana takes us inside the concentration camp are graphic and sometimes I had to take a break after reading them, but that is the power of her writing and what makes it so good. She’s an author who makes you care for her characters.

Johana has a great cast of characters in her book, I loved Emily Roy, and I’m hoping that she’ll soon appear in another book. Although Block 46 takes you to some very dark and disturbing places, it makes for an absolutely riveting read that I flew through. I could never be sure who the killer was, and I was certainly surprised by the ending. It is a gripping mystery but also a deeply moving story that will stay with you long after you have finished reading.