On my blog today, I’m sharing my thoughts on the gripping new novel by Joseph Knox, True Crime Story.

In the early hours of Saturday 17 December 2011, Zoe Nolan, a nineteen-year-old Manchester University student, walked out of a party taking place in the shared accommodation where she had been living for three months.

She was never seen again.

Seven years after her disappearance, struggling writer Evelyn Mitchell finds herself drawn into the mystery. Through interviews with Zoe’s closest friends and family, she begins piecing together what really happened in 2011. But where some versions of events overlap, aligning perfectly with one another, others stand in stark contrast, giving rise to troubling inconsistencies.

Shaken by revelations of Zoe’s secret life, and stalked by a figure from the shadows, Evelyn turns to crime writer Joseph Knox to help make sense of a case where everyone has something to hide.

Zoe Nolan may be missing presumed dead, but her story is only just beginning.

I’m a huge fan of Joseph Knox’s work. True Crime Story is one of the most original books I’ve read this year. It’s told in a very unusual way, and I thought it really worked. It is so engaging, and the characters came to life on the page.

The title is perfect for this book. It really does feel as though you are reading about a true-life event that has taken place. Joseph Knox himself is a character in his story as he tries to work out alongside aspiring writer, Evelyn Mitchell, what happened to Zoe Nolan a student who went missing in 2011. It was interesting reading this as I kept wondering if this was indeed based upon true events. But that was part of the magic of the storytelling.

The mystery of Zoe Nolan’s disappearance drew me into the book. I could see Evelyn Mitchell’s excitement as she talked about what she was hoping to achieve with her book, and her excitement at the prospect of solving the mystery. It made me want to read on as I wanted to find out what had happened to Zoe myself as much as she did.

Joseph Knox tells the story through a series of interviews with the people who knew Zoe and who were among the last to see her. They all had their own unique voice and I thought it was really well done how Joseph Knox mad their stories come to life. I couldn’t work out if any of them could possibly be involved in Zoe’s disappearance and I wanted to find out more about them. I had different theories forming in my mind, but I was never able to guess what had happened to her.

I think this would make a great audiobook. True Crime Story is an addictive read and it’ll have you thinking and examining everything you think you know about the characters. It was very entertaining. If you love listening to true crime podcasts, then you will love this book. I highly recommend it.

I’m delighted to be joining the blog tour for The Sleepwalker by Joseph Knox today on my blog. With thanks to Anne Cater at Random Things Tours for inviting me to take part. 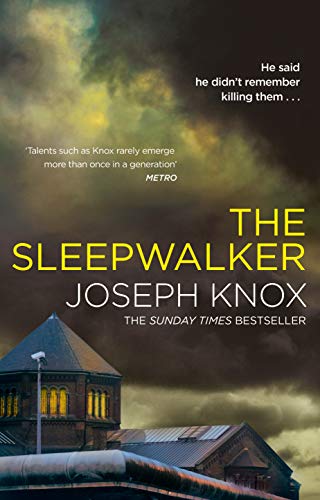 ‘He said he didn’t remember killing them…’

As a series of rolling blackouts plunge the city into darkness, Detective Aidan Waits sits on an abandoned hospital ward, watching a mass murderer slowly die. Transferred from his usual night shift duties and onto protective custody, he has just one job…

To extract the location of Martin Wick’s final victim before the notorious mass murderer passes away.

Wick has spent over a decade in prison, in near-total silence, having confessed to an unspeakable crime that shocked the nation and earned him the nickname of TheSleepwalker.

But when a daring premeditated attack leaves one police officer dead and another one fighting for his life, Wick’s whispered last words will send Waits on a journey into the heart of darkness…

Manipulated by a reticent psychopath from his past, and under investigation from his new partner, Detective Constable Naomi Black, Waits realises too late that a remorseless contract killer is at work.

Can Aidan Waits solve his last case before fleeing justice?

Or will his name be next on the hit list?

I’m a huge fan of Joseph Knox’s gritty crime thrillers set in Manchester. There is a real sense of authenticity to the setting of these books, and I love how Manchester is brought to life, especially in the darker areas of the city where gang lords rule, which Joseph Knox paints in a vivid portrayal. His writing definitely makes you feel as though you are there.

This time round in The Sleepwalker, Detective Aidan Waits is posted outside the ward of sadistic killer Martin Wicks who is on his deathbed. Martin was convicted of killing a mother and her three children several decades ago. But he has never revealed the location of one of the children he murdered. The police are hoping that Martin will finally tell them the location of the body of his last victim. But when Martin does speak to Aidan, he confesses that he is innocent and Aidan believes him. But something shocking happens. Martin comes under attack and is killed within the secure unit of the hospital, along with another officer, and another police officer is injured. Is someone determined to make sure that Martin stays silent?

Joseph Knox’s latest novel follows a very intriguing, multi-layered story. Joseph Knox also continues Aidan Waites own personal story which he began to peel back in the last book The Smiling Man. And again I found Aidan Wait’s story a really interesting part of this plot, especially his relationship with his mother and his sister, who he hasn’t seen for the best part of twenty years. This part of the story puts Aidan under quite a lot of strain, and I wasn’t sure how it was going to effect him as the story progressed.

The part of the mystery which I really wanted to know the answer to was if Martin Wicks was really guilty of the crimes he was convicted for or if he was innocent as he protested to Aidan. I could sense trouble ahead for Aidan as he was starting to come round to the idea that this was really the truth, but it doesn’t stop him in his quest.

I also really liked Aidan’s partnership with Naomi Black. Their partnership and friendship are put under some strain, but I thought they both worked really well together and there did seem to be chemistry between them. Aidan is such a compelling character and it’s been really intriguing to see his story develop over the course of three books. I’m really hoping that there are going to be more novels featuring him.

The final scenes to this book are action filled, pacy, tense, and I couldn’t stop reading until I had turned the final page. The Sleepwalker has a real addictive quality to it, and I would definitely recommend picking up the first two books as well as this one. Very, very good.

If you would like to purchase, The Sleepwalker you can do so by clicking on one of the following links below.