I Am Dust is the latest novel by Louise Beech and I am delighted to be taking part in the blog tour today on my blog. With thanks to Anne Cater from Random Things Tours for inviting me to take part. 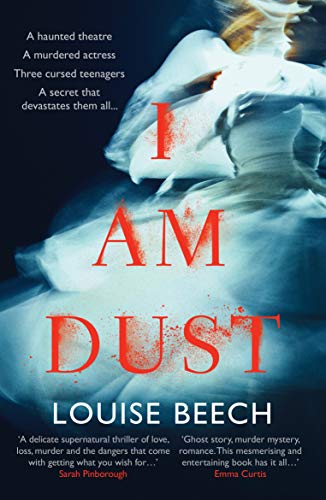 The Dean Wilson Theatre is believed to be haunted by a long-dead actress, singing her last song, waiting for her final cue, looking for her killer…

Now Dust, the iconic musical, is returning after twenty years. But who will be brave enough to take on the role of ghostly goddess Esme Black, last played by Morgan Miller, who was murdered in her dressing room?

Theatre usher Chloe Dee is caught up in the spectacle. As the new actors arrive, including an unexpected face from her past, everything changes. Are the eerie sounds and sightings backstage real or just her imagination? Is someone playing games?

Is the role of Esme Black cursed? Could witchcraft be at the heart of the tragedy? And are dark deeds from Chloe’s past about to catch up with her?
Not all the drama takes place onstage. Sometimes murder, magic, obsession and the biggest of betrayals are real life. When you’re in the theatre shadows, you see everything.

And Chloe has been watching…

If you’re looking for a writer to re-ignite or ignite a passion for reading, choose Louise Beech. I’ve now read her last two books, and she has fast become one of my favourite writers. I Am Dust is a haunting and lyrical piece of fiction. When I first started reading it, I thought I would have it finished in a matter of hours, but then I realised that this is a book to be savoured, and I deliberately slowed down. If there’s one book that you read all year, please make sure it’s one!

Set in a haunted theatre, Louise Beech immediately recreates the buzz, and the excitement as plans for a new show gets underway. The excitement mounts when it is revealed that they are scheduling a play that hasn’t been performed for two decades, but it has been forever associated with a mysterious death. Flicking back to the year 2005, a group of budding actors attempt to make contact with the dead via an Ouija Board, and they get a response that they never thought would be possible, one that will haunt them in the years ahead.

I thought the three lead characters, Chloe, Jess and Ryan, were very well rounded. As Louise takes us back to the time in 2005, when they are all members of a theatre youth club, I could see how desperate they were to solve the murder of Morgan Miller. Chloe is especially determined to find out the truth, and she doesn’t stop thinking about it.

I was also desperate to discover who killed Morgan. Although she is talked about in the past tense, as she is no longer alive, she becomes a character in her own right. And I wanted there to be justice for her.

I loved the setting of the theatre, which for me added a lot of atmosphere to the book. If I were to pick and choose between theatre and cinema, I would definitely say the theatre. There’s a buzz that you get there that isn’t quite the same when you’re sitting in a cinema watching a film. This is what I could also see in Louise Beech’s characters as well.

I’ve also always been fascinated by Ouija Boards although I don’t think I quite believe in the supernatural. The idea of communicating with the dead, though, really freaks me out, and I don’t think I would be quick, or eager, as the characters are to try one out. I could feel chills creeping up my spine as the characters sat down to try and make contact, and it did make me wonder what would happen if I tried it out. But I don’t think I’m going to be doing that any time soon.

Louise Beech has shown over the past few years that she is such a versatile writer. What she always manages to do is tell an utterly compelling story that will hold you within its grasp. I’ve already found a few reads which I’m sure are going to be in my top ten at the end of the year, and I’m certain I’ve found another. I Am Dust is pure perfection!

I Am Dust is available to buy:

I’m absolutely delighted to be joining the blog tour for Call Me Star Girl by Louise Beech. 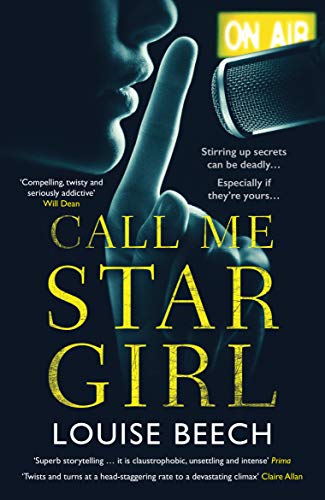 Stirring up secrets can be deadly … especially if they’re yours…

Pregnant Victoria Valbon was brutally murdered in an alley three weeks ago – and her killer hasn’t been caught.

Tonight is Stella McKeever’s final radio show. The theme is secrets. You tell her yours, and she’ll share some of hers.

What Stella really wants to know is more about the mysterious man calling the station … who says he knows who killed Victoria, and has proof.

Tonight is the night for secrets, and Stella wants to know everything…

With echoes of the Play Misty for Me, Call Me Star Girl is a taut, emotive and all-consuming psychological thriller that plays on our deepest fears, providing a stark reminder that stirring up dark secrets from the past can be deadly…

If you’re looking for a writer who will draw you into their story and into the lives of their characters in the most fascinating and intriguing way, then look no further than Louise Beech. Call Me Star Girl is a masterpiece in literary fiction with a dark edge that kept me utterly hooked all the way through. I’ve read many rave reviews for Louise’s previous work, so I was so excited to hear that she was moving into the crime genre, and I’m sure it’ll win her many new fans, which definitely includes me.

Stella McKeever is preparing for her last ever radio show, so deciding to take a different path for her final one, she is asking her listeners to phone in and tell their secrets, but she will also tell some of hers in exchange. But what Stella is really hoping for is that someone will get in touch with information about a young girl, who was found murdered not far from the radio station where she works, and perhaps even the killer might feel compelled to call in.

You get a real sense of Stella as a character in this book, and she is very well developed. She is a person who has suffered trauma in her past, after her mother, Elizabeth, abandoned her at a very young age, and she has never known her father. As Louise gradually revealed information about this, I couldn’t believe the reasons why this happened, and it really made me feel so sorry for Stella as I was reading. But I won’t be divulging any details on that here. The one person in her life who she can seem to totally rely on is her boyfriend, Tom, but there is even something a little odd in their relationship, which is what I personally thought.

What I thought was particularly excellent in Louise’s writing was how well the characters evolved. You will become invested in them as she reveals more details about her lives and they are what make this story so, so good.

The clever way in which Louise thought out her plot kept me thinking about the characters and how everything was going to unfold for them at the end, and be prepared; it’s a shocker of an ending. Nothing prepared me for how emotionally invested I would become in Louise Beech’s writing, I think the ending of this book will leave many people shedding a few tears.

Louise Beech is an absolutely brilliant writer, who drew me into her writing without any effort at all. Call Me Star Girl was one of those books that I just did not want to end. An utterly captivating story that will keep you gripped all the way through. It’s seriously good.

Thank you to Anne Cater at Random Things Tours for inviting me to join the blog tour and to Karen Sullivan at Orenda Books for sending me a copy to review.

If you would like to purchase Call Me Star Girl, you can do so by clicking on one of the following links below.