Happy publication day to Mary-Jane Riley, her latest novel Gone in the Night is published today and I’m delighted to be sharing my review as part of the blog tour. 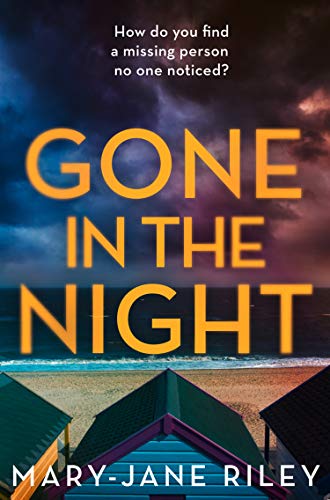 Some secrets are deadly…

When the victim of a car crash begs journalist Alex Devlin for help before disappearing without trace, Alex finds herself caught up in a mystery that won’t let her go.

Determined to find the missing man, she is soon investigating a conspiracy that threatens some of the most vulnerable members of society.

But will Alex be prepared to put her own life on the line to help those who can’t help themselves?

Gone in the Night is an engaging thriller by Mary-Jane Riley. The fourth in the Alex Devlin series but it can be easily read as a standalone. This is the first time I’ve actually come across Mary’s work. When I started reading this book, I thought I would try out the first couple of chapters, but once I had started it, I wanted to read on. I started this on the Easter Bank Holiday weekend and by the end of the day on the Monday I had finished it. It’s definitely a pacy read with an intriguing scenario that kept me asking questions. You’ll be hooked once you get started.

The novel opens with Cora searching for her brother, Rick who has recently been sleeping rough. He always manages to get in contact with Cora somehow, but his silence causes Cora to worry. Rick has been known to disappear before so she knows she won’t get much help from the police. Later on, she teams up with journalist Alex Devlin, who was a witness to a car accident which she believes involved Cora’s missing brother. It seems there are plenty of people who don’t want them to find him.

There was such an intriguing mystery element to this book. First off there is the situation with Cora’s brother, and then there is a far deeper mystery when Alex begins to discover that there have been more homeless people disappearing off the streets and there have been suspicious deaths. And not to mention there are some shady individuals who it seems will stop at nothing to keep these goings on quiet and out of the public eye.

It’s a terrifying thought to think that if you went missing, would anyone look for you? What Mary-Jane Riley highlights in her novel is how easily the homeless can be exploited; desperate for warmth and security they may just be willing to do anything to get there. You can see how they would appeal to certain criminals looking to recruit people to help out in their schemes.

Alex becomes intrigued by the situation that is facing the homeless after speaking with Cora. She is tenacious in her investigations and won’t stop until she gets to the bottom of what’s going on, no matter the cost to her own well-being. Like Alex, I wanted to understand what was happening and what had happened to Cora’s brother. Instead of reading the first couple of chapters like I originally intended, I ended up flying through this book as each chapter just left me eager to find out more.

With a highly engaging plot and addictive writing that will keep you intrigued, Gone in the Night is a novel I would definitely recommend to thriller fans.

Thank you to Emma Welton at Damppebbles blog tours for inviting me to take part in the blog and to Killer Reads for providing me with an e-copy via Netgalley.

If you would like to purchase Gone in the Night, you can do so by clicking on one of the following links below.