I’m delighted to be sharing my thoughts on Margaret Kirk’s second novel, What Lies Buried on my blog today.

A missing child. A seventy-year-old murder. And a killer who’s still on the loose.

Ten year-old Erin is missing; taken in broad daylight during a friend’s birthday party. With no witnesses and no leads, DI Lukas Mahler races against time to find her. But is it already too late for Erin – and will her abductor stop at one stolen child?

And the discovery of human remains on a construction site near Inverness confronts Mahler’s team with a cold case from the 1940s. Was Aeneas Grant’s murder linked to a nearby POW camp, or is there an even darker story to be uncovered?

With his team stretched to the limit, Mahler’s hunt for Erin’s abductor takes him from Inverness to the Lake District. And decades-old family secrets link both cases in a shocking final twist.

What Lies Buried, Margaret Kirk’s second novel tackles some hard-hitting and dark themes. In the opening, we are faced with the discovery of a decade’s old corpse, linked back to World War Two. But although the case is intriguing enough, the police have a much bigger problem on their hands. A young girl, ten-year-old Erin, is missing and hasn’t been seen for several days and she is their top priority. The police are no closer to finding out what happened to her, and they have very few leads to follow. But soon they begin to realise that they are facing a much larger and scarier problem.

What initially intrigued me when I was reading was the discovery of the corpse in the opening pages. I wanted to know who this person was who had been found and the reason why they had been killed and abandoned there. And then we have the missing girl, and the very few leads the police are following. I was just captivated by this story, and I had to find out how things were going to unfold, especially given the fact that the police didn’t seem to have a clue as to what was happening.

What I really like about Margaret’s writing is her ability to create atmosphere and the landscape where she sets her story, which she does so well. I found this as well in her first novel, Shadow Man. Inverness is brought to life, and Margaret’s description of the weather made me feel as though I was there and experiencing it for myself.

There is another interesting element in this book, which comes in the form of vigilantes. We get to read snippets of the conversations these people are having with each other, and it makes for quite scary reading. These are people who feel that they could do a much better job than the police, and they are keen to apprehend the person responsible for Erin’s disappearance themselves. And as the case grows darker, they are even more determined to carry out their plans.

What Lies Buried is another terrific addition to the DI Lukas Mahler series. Very clever and well thought out, I was on tenterhooks as the novel raced towards its climax. I can’t wait to read more.

If you would like to purchase What Lies Buried, you can do so by clicking on one of the following links below. 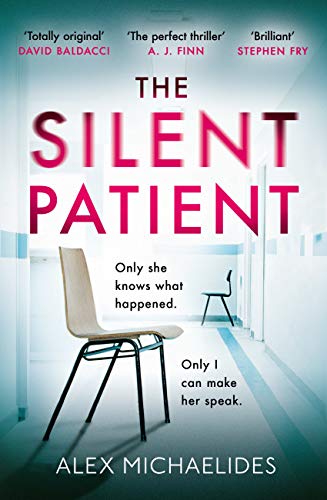 ALICIA
Alicia Berenson writes a diary as a release, an outlet – and to prove to her beloved husband that everything is fine. She can’t bear the thought of worrying Gabriel, or causing him pain.

Until, late one evening, Alicia shoots Gabriel five times and then never speaks another word.

THEO
Forensic psychotherapist Theo Faber is convinced he can successfully treat Alicia, where all others have failed. Obsessed with investigating her crime, his discoveries suggest Alicia’s silence goes far deeper than he first thought.

And if she speaks, would he want to hear the truth?

Compulsive is one word you could use to describe The Silent Patient. It was one of my most anticipated reads that I picked up in Harrogate at the Theakston Crime Festival earlier this year. It is highly addictive and it really takes you into the minds of its characters and explores their psychology. Alex Michaelides writing draws you into the story as the protagonist, Theo Faber, attempts to break the silence of convicted murderer, Alicia Berenson who has been rendered mute for six years and has spent that time in The Grove, a psychiatric unit. Theo has become obsessed with her case, but can he finally be the one to find out what really happened the night she shot her husband dead? When an opportunity arises to join The Grove as a psychiatrist he jumps at the chance, determined to reach out to Alicia.

I really enjoyed reading this book and I couldn’t wait to find out if Theo was going to achieve his goal. I think the anticipation of wondering if this was going to be the moment that Alicia spoke is what made most parts of this book a really intense read and Alex controlled this really well, it did keep me turning those pages, and reading onto the next chapter.

There is some excellent character development here; we have Theo, who is mysterious and unnerving, and Alicia who I wanted to get to the bottom of, and find out what was really going through her mind the night she killed her husband, Gabriel. Like Theo, I wanted to drag the answers out of her and I couldn’t wait to see what she finally had to say. Although we don’t hear from Alicia, we do have her diary extracts, which again I raced through as I was reading as I tried to uncover what really happened.

This is very much a psychological story, and the reveals that came at the end of the book left me thinking, whoa, and I had to flick back just to see what it was that I had missed but it definitely did make so much sense and the way in which everything was pulled together was very good. The tension is really turned up a notch in the final chapters.

The Silent Patient has bestseller written all over it. It’s tightly plotted and very well written. I’m looking forward to seeing what Alex Michaelides comes up with next. If you’re a fan of character-driven psychological thrillers, then you should definitely pick up this book.