I’m delighted to be joining the blog tour for The Closer I Get by Paul Burston today on my blog. With thanks to Anne Cater at Random Things Tours for inviting me to take part. 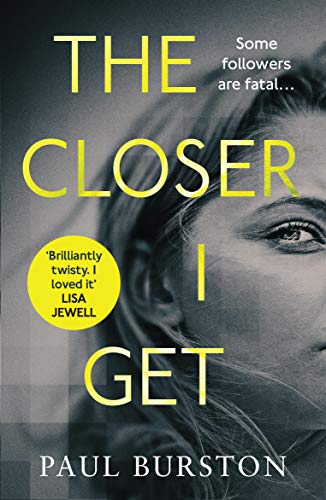 Tom is a successful author, but he’s struggling to finish his novel. His main distraction is an online admirer, Evie, who simply won’t leave him alone.

Evie is smart, well read and unstable; she lives with her father and her social-media friendships are not only her escape, but everything she has.

When she’s hit with a restraining order, her world is turned upside down, and Tom is free to live his life again, to concentrate on writing.

But things aren’t really adding up. For Tom is distracted but also addicted to his online relationships, and when they take a darker, more menacing turn, he feels powerless to change things. Because maybe he needs Evie more than he’s letting on.

A compulsive, disturbingly relevant, twisty and powerful psychological thriller, The Closer I Get is also a searing commentary on the fragility and insincerity of online relationships, and the danger that can lurk just one ‘like’ away…

The Closer I Get by Paul Burston is a powerful and chilling look at the dark side of social media. Trolling and stalking seems to be an ever real threat in today’s world. The explosion of social media sites such as Twitter and Facebook and other social media sites, over the last decade or so has benefited us hugely, by bringing the world closer together. But it can also come at a cost. Anyone can now find out information about you. Where you visit for a cup of coffee each day, what your favourite meal is and where you work. All from the click of a button. It’s quite scary to think about. This is what happens to Paul’s main character, Tom.

Tom, who is a writer, wrote a bestseller which was released a few years ago and became a major Hollywood film. Although he hasn’t hit the bestseller charts in recent years, he still has a good relationship with his agent. She seems to be a source of encouragement and comfort to Tom. She is always egging him on to finish his latest book. But Tom’s own world starts to crumble when he becomes the victim of a stalker. Tom then has to resort to drastic measures to get the person to stop.

Paul Burston’s writing is very readable, and I quickly became drawn into the story. What I thought made this book really work and what made it so fascinating, was telling the story both from Tom and Evie’s point of view. Evie is the woman who he accuses of stalking him. Tom is eventually forced to take her to court in the hope that a restraining order will solve his problems and that after that point, she will finally leave him alone. From what I could begin to see as the story unfolded, was that here were two very conflicting accounts. I could never be sure who was telling the truth about what was really going on. It was probably the characters in this book that made it so gripping for me as I tried to work out which version was the correct one.

I really liked how Paul brought everything together at the conclusion, which gave the ending a very satisfactory feel. It was a very surprising finale that really chilled me.

This is an incredibly tense piece of fiction which races towards an uncertain denouement as the two lead characters collide. It will also, perhaps, make you think again about the people who you follow on social media and who follows you back.

If you would like to purchase The Closer I Get, you can do so by clicking on one of the following links below.