I’m delighted to be joining the blog tour for Closer Than Blood by Paul Grzegorzek, the second book in the PC Gareth Bell series. With thanks to Sarah Hardy from Books on the Bright Side Publicity for inviting me to take part. 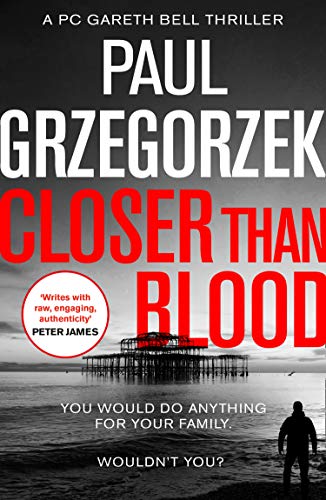 The real nightmare begins when the missing person returns…

PC Gareth Bell is about to arrest a cocaine dealer on Brighton Marina, when he makes a shocking discovery that turns his world upside down: the dealer is his long-lost brother, Jake, someone he thought had died years ago.

But their reunion is short lived. For Jake is on the run from a cold-blooded killer, whose network reaches all the way into the police force itself. Now that his brother’s life is on the line, Bell has only two choices. Family, or duty?

Paul Grzegorzek is a writer who writes with real authenticity. Having spent several years in the police force himself, you know that you are safely in the hands of a writer who knows his stuff.

Closer Than Blood is a real page-turner and a thrill a minute. In the second book in his PC Gareth Bell series, Paul takes us deep into Brighton’s murky underworld and the latest case that Gareth finds himself wrapped up in may pose a critical threat to national security. He knows that this particular case certainly isn’t going to be an easy ride, and there is a real sense of imminent danger.

I recently read the first book in this series, The Follow and there was something about PC Gareth Bell that made both of these books feel so fresh. He is a police officer who doesn’t always abide by the law, sometimes he will disobey orders from his superiors, but he will only do this with good reason to and with getting justice as the ultimate aim. And this is something that I really liked about him. He is never predictable.

The case Gareth is investigating hits far too close to home for his liking. For many years his family suspected that his brother, Jake was dead, but to Gareth’s utter bewilderment he discovers he is alive and in a hell of a lot of trouble. And his brother’s problems are about to land on his doorstep when some seriously nasty people start threatening Gareth and the people he loves. What exactly has his brother got himself involved in? How are any of them going to make it out of this alive?

After reading the opening chapters, I was desperate to know who it was that Gareth’s brother had upset so badly and what he had done to deserve this. I was hooked straight away. When it is revealed that Jake had stolen something from the people who are trying to kill him, I flew through the book to find out what it was.

If you are looking for a crime novel that is pacy and filled with thrills from the get-go, then I would definitely recommend Closer Than Blood. The storyline is gritty and will have you totally invested in the plot and the characters. I can’t recommend this book and this series highly enough.

I can’t wait to read more from Paul Grzegorzek!

If you would like to purchase Closer than Blood, you can do so by clicking on one of the following links below.