Today I’m delighted to be joining a special blog tour, organised by Penguin to celebrate the completion of a project which has published 21 of John Le Carre’s works as modern classics. This makes him the only living author to have the greatest body of work to be awarded classic status. And one of his classics The Little Drummer Girl is soon to be a major six part drama on the BBC.

To help celebrate this achievement I have a review of The Looking Glass War to share with you, and I have one copy of the book to giveaway. To enter the competition, all you have to do is retweet my pinned tweet, leave me a comment with the following hashtag #TheLookingGlassWar and follow me at @collinsjacob115. One winner will be drawn at random. The competition will end on Wednesday, 10th October 2018 at midnight. Good luck! 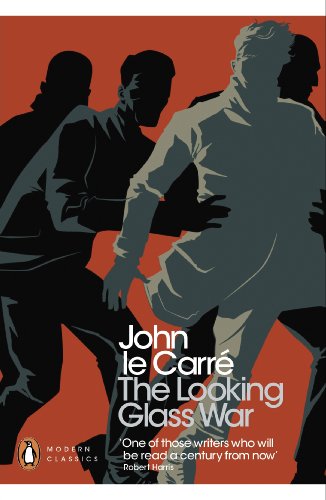 A Cold War thriller from the master of spy fiction, John le Carré’s The Looking Glass War is a gripping novel of double-crosses, audacious bluffs and the ever-present threat of nuclear war, published in Penguin Modern Classics.

When the Department – faded since the war and busy only with bureaucratic battles – hears rumour of a missile base near the West German border, it seems like the perfect opportunity to regain some political standing in the Intelligence market place. The Cold War is at its height and the Department is dying for a piece of the action.

Swiftly becoming carried away by fear and pride, the Department and her officers send deactivated agent Fred Leiser back into East Germany, armed only with some schoolboy training and his memories of the war. In the land of eloquent silence that is Communist East Germany, Leiser’s fate becomes inseparable from the Department’s.

I was drawn into this book from the opening line. John le Carre’s writing commands such a strong sense of place, and it immediately captured my attention. The imagery is very dark and atmospheric.

The Looking Glass War, first published in 1965, is the first book by John le Carré which I have read; I did watch The Night Manager when it was on TV a couple of years ago, and I remember being so gripped by the drama as it unfolded. This definitely won’t be the last John le Carré book I read. It is the fourth book in the George Smiley series, but it can easily be read as a standalone.

What I thought was particularly strong about this book was the characterisation. I was fascinated by the people who worked in the Department, which was once an essential military agency during the Second World War, but now it doesn’t carry the same prestige as it once did. The characters are ambitious, especially Leclerc, who is the director of the Department. But Leclerc’s ambition almost verges on being dangerous, especially as this novel is set during the era of The Cold War which significantly darkens the tone of the book. The “glory days” of the Second World War are still very fresh in some of the characters minds, and they are keen for the Department to return to what it once was.

In the opening pages of the book, a British spy is killed while working for the Department abroad. He is waiting for a plane to land during a snowstorm, carrying an important piece of information, a film, that he is meant to collect and return with to London when he is killed in a hit and run. His death puts the operation the Department is undertaking in jeopardy, and they have to rethink their plans and get everything up and running again as swiftly as possible. This is the mystery part of the novel which really intrigued me.

John le Carré does delve into the psyche of his characters in his book, in particular, Avery, who is sent out to finish the job that resulted in another man’s death. I liked that we got to see into his family life. You do get the sense that he is, aside from his job, just an ordinary guy, with ordinary family troubles.

The Looking Glass War is a quick read, which offers a fascinating glimpse into the spy world. John le Carré is a spy novelist who knows what he is talking about. I’m looking forward to reading more of John le Carre’s works. Thank you to Sarah Wright at Penguin for inviting me to take part in the blog tour.