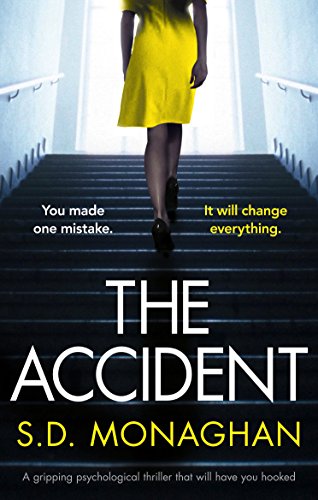 One mistake could change your life forever.

Tara has it all. Married and about to move into her dream home, she can’t explain why she is tempted by one last fling with her ex before she settles down.

David would do anything for Tara. So when he finds her with another man, his world starts to crumble around him.

Ryan isn’t prepared to for the punch David throws at him. Stumbling, he slips over the balcony and falls three storeys to the patio below.

How far would you go to save everything you have?

The Accident is a tense and claustrophobic read from S.D. Monaghan, once you start reading this, you won’t be able to stop.

David and Tara have everything they could ever want in their life. Tara has made a fortune from her paintings, and they have just completed building work on a luxury new home in a prestigious part of town. David is riding high, a man who originated from the local estate; he sometimes can’t believe his luck that he managed to escape. But in the opening pages of the book, he discovers that his pregnant wife, Tara has slept with her former boyfriend, Ryan, the man who has helped to build their home. David’s world is torn apart, and one wrong move on his part leads to devastating consequences for them both. Is everything David and Tara worked for about to come to a crushing end?

The opening pages of this book had me hooked, I wanted to know how David was going to get himself out of the situation he now found himself in. What follows is a twisty ride as David and Tara’s world begins to spiral out of control. There were some tense scenes in this book, heightened by the fact that Tara was pregnant which came with the fear that she could lose the baby due to the stress and worry this new situation has brought on them.

S.D. Monaghan’s character’s kept me gripped throughout the novel. There were times when I struggled to like both David and Tara, but they were both intriguing. I was interested in learning about their background, particularly as Tara was once David’s student, and it made for fascinating reading to learn how they met and how this subsequently blossomed into a relationship. I also found David’s background interesting, particularly as he had come from a deprived area and had managed to escape.

The Accident is a good debut that I would recommend for thriller lovers. S D Monaghan is a writer that I will be keeping an eye on. Thank you to Bookouture and NetGalley for the advance reader copy and to Noelle Holton for the place on the blog tour.