Happy publication day to Mark Hill. His latest book The Bad Place is the start of a brand new crime series featuring DI Sasha Dawson and it is published today. 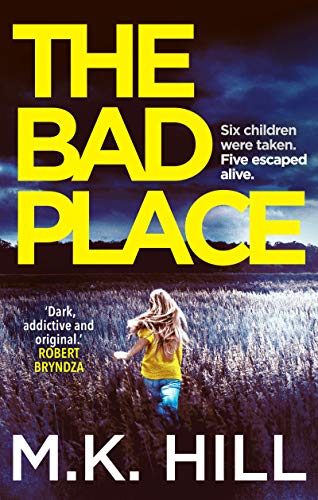 The newspapers called it The Bad Place. A remote farm out on the Thames estuary, where six children were held captive for two weeks. Five of them got out alive.

That was twenty years ago. Now adults, they meet up annually to hold a candlelit vigil for their friend who died. The only rule is that no-one can talk about what happened the night they escaped. But at this year’s event, one of them witnesses a kidnapping. A young girl, Sammi, is bundled into a van in front of their eyes.

Is history repeating itself? Is one of them responsible? Or is someone sending them a twisted message?

DI Sasha Dawson, of Essex Police, is certain that the key to finding Sammi lies in finding out the truth about The Bad Place. But she also knows that with every second she spends trying to unlock the past, the clock ticks down for the missing girl…

The Bad Place is an excellent start to a new crime series by M.K. Hill, which I enjoyed reading very much indeed. We witness the kidnapping of six children when their kidnapper hijacks the minibus they are travelling in. He takes them to a remote location which becomes infamously known as The Bad Place to the press. But just what happened there has remained shrouded in mystery, with many people believing that the people directly involved in the kidnapping have not told the full truth. And why did only five of the children escape?

The Bad Place is a thriller where nothing is at it seems. Many years after the terrifying kidnapping took place, the children who were involved, now adults, still meet up and raise a toast to the friend they lost that night. It’s their own way of remembering her, even though some of them no longer see eye to eye. During one evening, when they are hosting a planned get-together, one of them witnesses a kidnapping. It terrifies her into thinking that their kidnapper has returned, but how could it be him when he was killed on the night they were rescued? We are then introduced to DI Sasha Dawson, who was a constable in the police force when the five children were found.

I really liked Sasha. She is determined to put the victims of the crimes first at the forefront of her mind. But her dedication to her work does garner some criticism from her mother. Sasha’s mother fears Sasha is letting her family slip by the wayside and this begins to cause a lot of frictions. Sasha’s mother is quick to let her feelings be known, which does cause some tension between them. Sasha’s home and work life are weaved together very well, and there was a very good balance between the two.

As I was reading this book, I kept thinking that there must be some truth in the speculation that something very dark had yet to be uncovered. After the young girl is kidnapped in the present day I had suspicions about a few people who I thought could be involved. There were quite a few red herrings planted which were skilfully weaved into the story and I didn’t predict the final outcome.

The book had such a chilling opening, and I was hooked right away. I flicked through the pages as fast as I could to find out how everything was going to come together at the end. When the final revelations were revealed, I couldn’t believe what I was reading.

The Bad Place is a brilliant introduction to DI Sasha Dawson, and I am definitely keen to read more books featuring her. You’ll be racking your brains right the way through trying to work out just what is going on here and when the final truth hits, it will be shocking.  Very, very good.

If you would like to purchase The Bad Place, you can do so by clicking on one of the following links below.