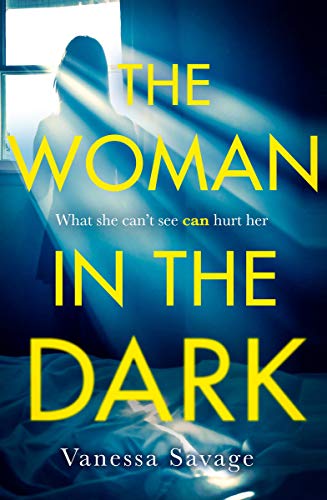 For Sarah and Patrick, family life has always been easy. But when Sarah’s mother dies, it sends Sarah into a downwards spiral. Knowing they need a fresh start, Patrick moves the family to the beachside house he grew up in.

But there is a catch: while their new home carries only happy memories for Patrick, to everyone else it’s known as the Murder House – named for the family that was killed there.

Patrick is adamant they can make it perfect again, though with their children plagued by nightmares and a constant sense they’re being watched, Sarah’s not so sure.

Because the longer they live in their ‘dream home’, the more different her loving husband becomes . . .

The Woman in the Dark is such a tense, claustrophobic read with a very disturbing premise. A family looking for a fresh start are pushed to the brink as lies and deceit threaten to tear them apart, and there is more than enough tension to give you shivers.

It was the premise of this book which first drew my attention as well as the clever opening paragraph which straight away made me think that I was in for an exciting read. Sarah, Patrick and the rest of their family decide to start anew with a house move, the same house that Patrick lived in when he was a child, and it holds perfect memories for him which he is keen to recreate. But since Patrick was there the property has become known as ‘The Murder House,’ following the brutal murder of a family which took place there several years earlier, and their arrival at the house prompts several of the locals to turn their heads. But Patrick is adamant he can make it the way how it was when he knew it, but can things ever be how they were?

I really liked the creepy vibe of the house, and I thought that Vanessa Savage played this very well, especially as we started to get to learn more about the family. It continued to make me think that there were dark secrets still to be uncovered, and there is plenty of deceit and unnerving truths to discover, as Vanessa gradually begins to unravel the dark truths that haunt both Sarah and Patrick.

I, and I’m sure many people will be when others come to read this, was totally on Sarah’s side when Patrick announced that he wanted to move into the house. Why on earth would anyone want to move somewhere where a family had been killed, no matter what the family connection was? And then I wanted to know why Patrick was so drawn to his former home especially after what had happened. And this is one of the points which make it such a fascinating read. What Vanessa also kept me thinking was, was there something more at work here that I just wasn’t quite seeing.

This is a book that will really make you care and think about the characters, and there are some who will get under your skin. Vanessa Savage keeps the tension turning up a notch and delivers a shocking ending. This is definitely recommended by me for lovers of psychological thrillers. Excellent stuff.

If you would like to purchase The Woman in the Dark you can do so by clicking on one of the following links below.

Book Review 📚
I couldn’t resist buying a copy of the new novel by Elodie Harper, The Wolf Den when I went into Waterstones today.
BOOK REVIEW 📚
Book Review 📚
Coffee ☕️ and books📚
What are you reading this weekend? 📚