I’m delighted to be joining the blog tour for Winterman by Alex Walters on my blog today. 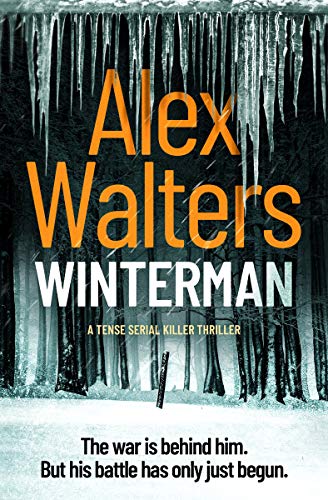 The War is Behind Him. But his battle has only just begun…

DI Ivan Winterman is a man with a troubled past. The Blitz has left his young son dead and his wife seriously injured. He has made enemies in high places and, with his career going nowhere, he returns to his home town in East Anglia, seeking to rebuild his life in a country gripped by post-war austerity and the coldest winter on record.

As the first snow begins to fall, a drunken ex-clergyman stumbles on the semi-mummified body of a small child concealed in a ruined cottage. Days later, a second similar child’s body is found in a Fenland dyke. Both bodies have been dead for several years, preserved in the Fens, the cause of death unknown.

Winterman, supported by a small team of assorted misfits, finds himself leading the investigation, uncovering a web of connections and secrets in the small rural community. When a further murder victim is discovered, Winterman discovers that the secrets are darker and the threat far more immediate than he’d ever envisaged.

And, as the snow finally begins to thaw over the Fens, Winterman realises that his worst nightmares are about to come true…

Winterman by Alex Walters is a dark, dark crime novel, set in the depths of winter just after the Second World War which has devastated Britain and Europe. There is plenty of atmosphere in this book; I could feel the bite that winter had on the residents of the village where the book is set, and there was a really sinister tone that kept me gripped. I think I was looking at every single one of the characters as I tried to work out who was behind the crimes that had taken place, and there are some disturbing ones.

There’s a really chilling opening scene in which we see rising panic ensue after a young boy disappears just before a blackout. Several years later and DI Ivan Winterman arrives in the town and it isn’t long after his arrival when a child’s mummified body is found. And it isn’t the only body to be discovered. This is a town where crimes very rarely happen, and Winterman knows he has a tough case on his hands as he attempts to piece back evidence that goes back over the years.

I thought that the author conveyed a real sense of place and time in this book. We can see the effects that the war has had on the local community and on the wider country with rationing still in force. Rationing carried on in this country for years after the war, as Great Britain rebuilt itself.

DI Ivan Winterman was a character who I really engaged with. It was fascinating to see how the other members of the police team took to him, and how they worked together, as he has just taken on one of the top jobs in policing. I was wondering if this was going to cause a few issues as no one from the team was promoted to the role. I don’t think I would be too happy if an outsider came in and took the top job.

The structure of the novel was cleverly thought out, and it did have some heartbreaking reveals towards the end which I don’t think I’ll be forgetting about for a while. And there was a heart-pounding conclusion. The ending did give me chills as I wondered if such things did actually occur during the period that the book is set, and it wouldn’t surprise me at all if such goings on did actually happen.

The whole plot just kept me gripped. I wanted to find out who the children were who had been uncovered, and especially, as reports came about that children had started to disappear from the area a few years ago. Of course in the time period the book is set, policing was a lot harder than it is today, as they didn’t have the advances in science we have today. It seemed to me that there was something much more going on here, which was hiding in the shadows and I feared that this wasn’t going to be over for the residents of the town any time soon.

If you’re a fan of historical crime fiction then definitely give this book a go. It’s a real page-turner that will chill you and keep you utterly gripped.

If you would like to purchase Winterman, you can do so by clicking on the following link below.