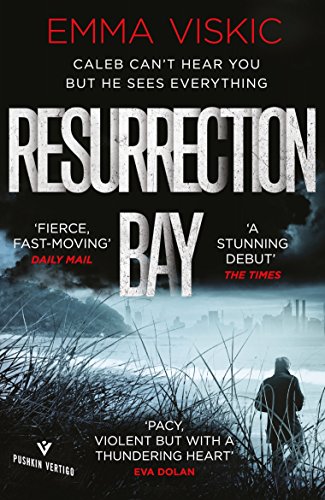 CALEB ZELIC IS ON THE HUNT FOR HIS FRIEND’S KILLER

His childhood friend has been brutally murdered at his home in Melbourne. Tortured by guilt, Caleb vows to track down the killer. But he’s profoundly deaf; missed words and misread lips can lead to confusion, and trouble.

HE NEVER FORGETS A FACE

Fortunately, Caleb knows how to read people; a sideways glance, an unconvincing smile, speak volumes. When his friend Frankie, a former cop, offers to help, they soon discover the killer is on their tail.

Sensing that his ex-wife may also be in danger, Caleb insists they return to their hometown of Resurrection Bay. But here he learns that everyone – including his murdered friend – is hiding something. And the deeper he digs, the darker the secrets…

Emma Viskic has created a fantastic protagonist in her debut novel Resurrection Bay who was instantly likeable from the first page. There is action from the get-go in this book, and the pace never let up. Brilliant addictive writing and hugely engaging dialogue; bring on the next book in the series, I say.

Resurrection Bay opens up with the murder of Caleb Zelic’s friend, and the finger of suspicion quickly falls on him. Caleb is deaf, so he sees the world differently from his friends, family and the people who he works with and this also puts him in a very vulnerable position, especially when he himself is targeted. But just what has Caleb’s friend got himself involved in that has ended up with him being killed? And now Caleb realises that he may soon be being hunted by his friend’s ruthless killers.

The mystery element in this book was particularly gripping. I wanted to know what it was that Caleb’s friend had done to wind them up in the situation they were currently in, and who the people were who were trying to silence them. It was a plot that I immediately became swept up in, and I turned those pages furiously to find out what the answers were. I was really interested in the idea that Emma chose a deaf character for her protagonist, and I thought that this was written really well. It did make me feel more anxious for Caleb as I was reading as he tried to pursue his own investigations while trying to avoid some very shady characters. But Emma also shows the depths of her research into this by including sign language and the skill of lip reading which Caleb uses all the time when conversing with his relatives and colleagues. This was also done very well.

I also really liked Kat, Caleb’s business partner, who I found intriguing. I really liked their relationship, and I loved the wit in their dialogue. They were a fantastic team together.

Resurrection Bay definitely has an unpredictable plot that surprised me along the way. This is a stunning, fast paced read that I really enjoyed. Thank you to Tabitha Pelly at Pushkin Press for sending me a copy of the book to review.